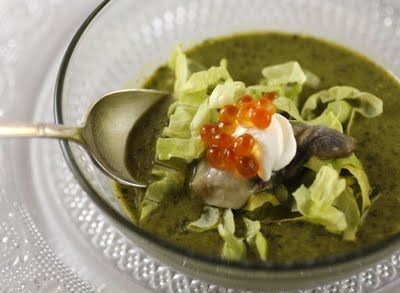 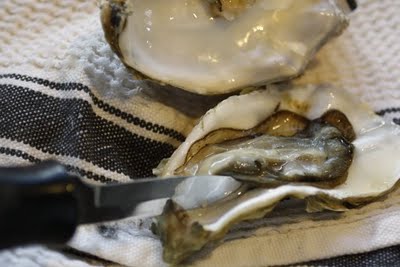 Oysters Rockefeller consists of oysters on the half-shell that have been topped with various other ingredients (often spinach or parsley, cheese, a rich butter sauce and bread crumbs) and are then baked or broiled.
The dish was created in 1899 at the New Orleans restaurant Antoine’s by Jules Alciatore, son of the restaurant’s founder. It was named Oysters Rockefeller after John D. Rockefeller, the richest American at the time, for the richness of the sauce.  (from wikipedia)
Sunken City Supper Club
The Soup Course

In the previous post I was so excited to share the debut of our Sunken City Supper Club: A place to mingle with friends and neighbors – to enjoy the camaraderie, great food, wine, and perhaps a little dancing to the awesome intimate jazz standards performed by Barry Anthony and Bill Ryan. Their band is The Swing Of Things.

I hope you have a couple of minutes to enjoy The Swing Of Things as they perform “I’ve Heard That Song Before.” The song, popular in 1942, is just so fun and lovely, it can put anyone in a good mood…

Puree a small onion, 1/2 bunch parsley, 3 scallions, and 3 large leaves of butter lettuce in a food processor. Add a pound of fresh spinach and continue to puree to a uniform consistency.
Melt 4 T. butter in a saucepan, add 4 anchovy filets stirring until dissolved. Add the vegetable puree and cook for 10 minutes over medium heat. Add 3 T. lemon juice and 3 T. flour.

Finish with 1/2 c. grated Parmesan cheese, salt and pepper to taste. Just before serving add a splash of Pastis and the liquid from the shucked oysters.
Garnish with shredded butter lettuce, a fresh shucked oyster, a small dollop of creme fraiche and salmon roe or caviar of your choice.
The initial idea for this recipe came from Barbara Kafka’s excellent soup cookbook, Soup A Way of Life. 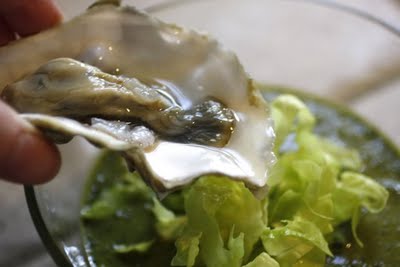 Slide the fresh oyster onto the butter lettuce. 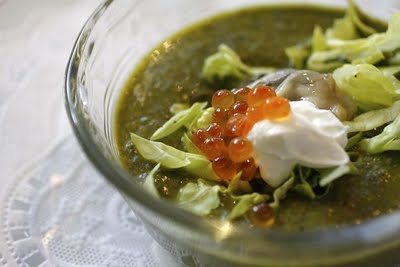 A soup inspired by a secret legendary old New Orleans recipe was the perfect one for the first Sunken City Supper Club dinner.