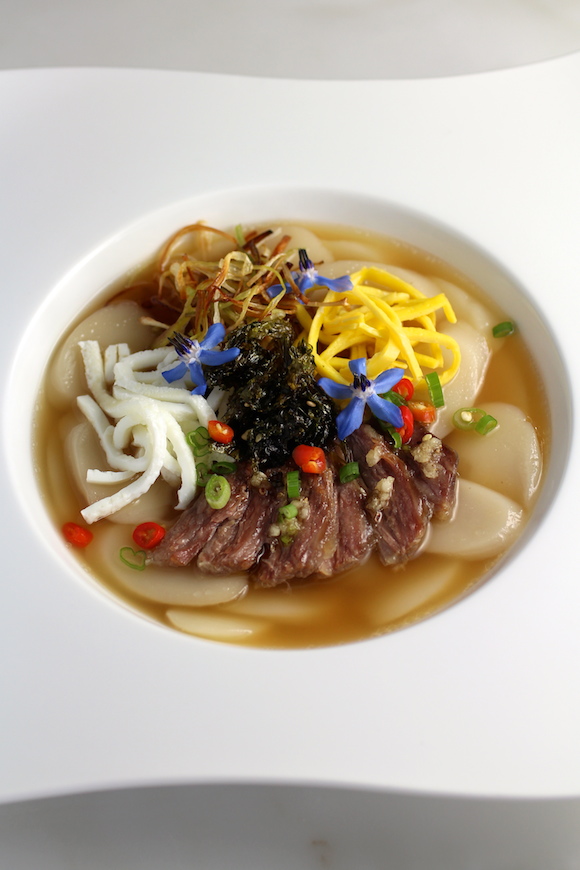 Happy Lunar New Year! We’re celebrating with the Korean soup traditionally eaten on this day – Tteokguk. Rice Cake Soup is the main dish of Seollal (Lunar New Year). It is a day to express respect and gratitude, especially to one’s elders and one’s ancestors. The white color of the rice cakes is said to symbolize purity and cleanliness while their shape represents coins, symbolizing success and prosperity.

My version of tteokguk is not exactly traditional but I sure do love symbolic meals, that is one of the reasons why Passover is a favorite holiday. Here, I make a rich stock with roasted beef bones as well as brisket – to manifest a flavorful New Year. I add hot chiles – so our year will be spicy! I garnish with a rainbow of color – for a bright, brilliant, colorful year to come. And finish with edible flowers – for beauty and grace… 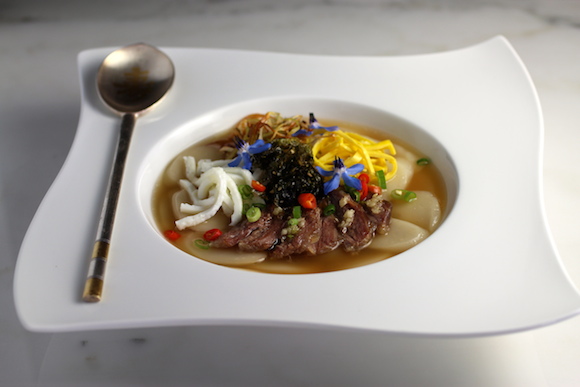 There are three components to this recipe – the broth, the rice cakes, and the garnishes. 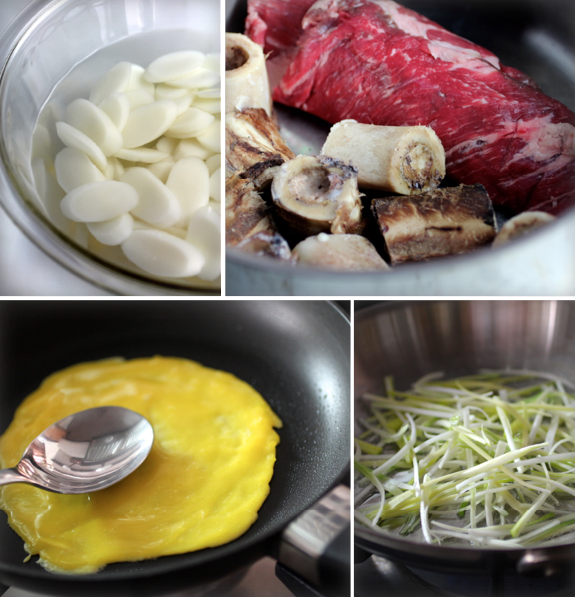 Roast the bones in a 350° oven for about 30 minutes or until they are browned. Place all the ingredients in a large soup pot and cover with water. Bring to a boil, then simmer until the brisket is tender, about two hours. Occasionally skim the surface  to remove scum and excess fat.

Remove the brisket from the broth and set aside. Strain the broth, discarding all the solids. Place soup in a clean pot. Add seasonings. Bring to a boil. 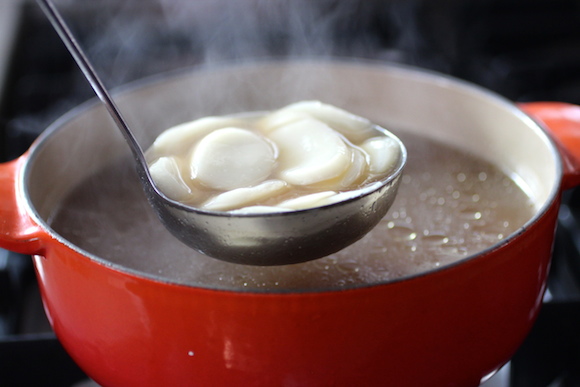 Soak rice cakes in water for 30 minutes. Drain. Add rice cakes to the broth and cook over a gentle boil for 8 minutes. The soup is now ready to serve. 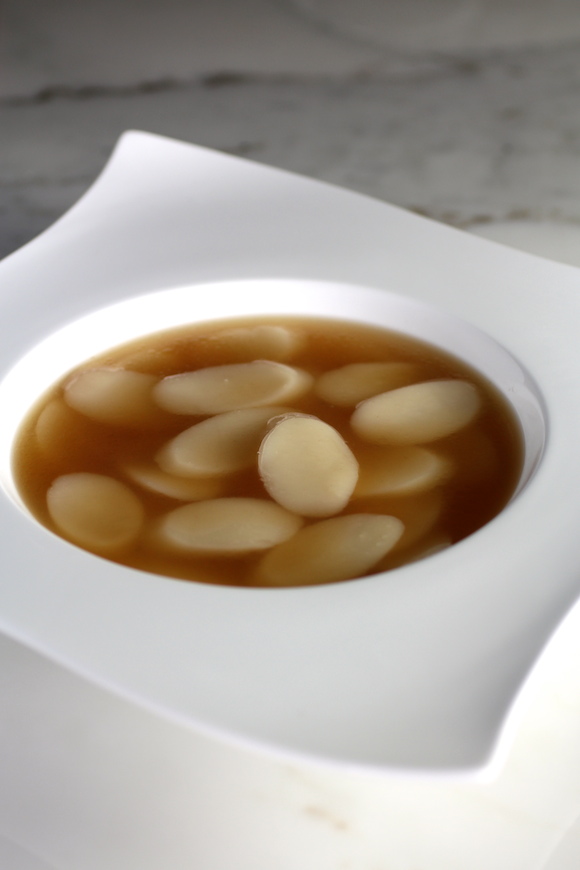 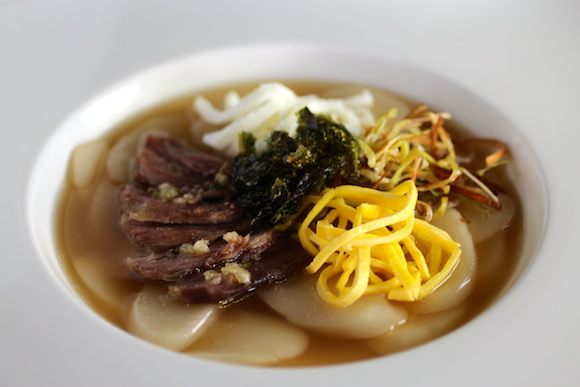 Fan the brisket slices over the top of the rice cakes. Add mounds of egg ribbons, frizzled leek, and seaweed. 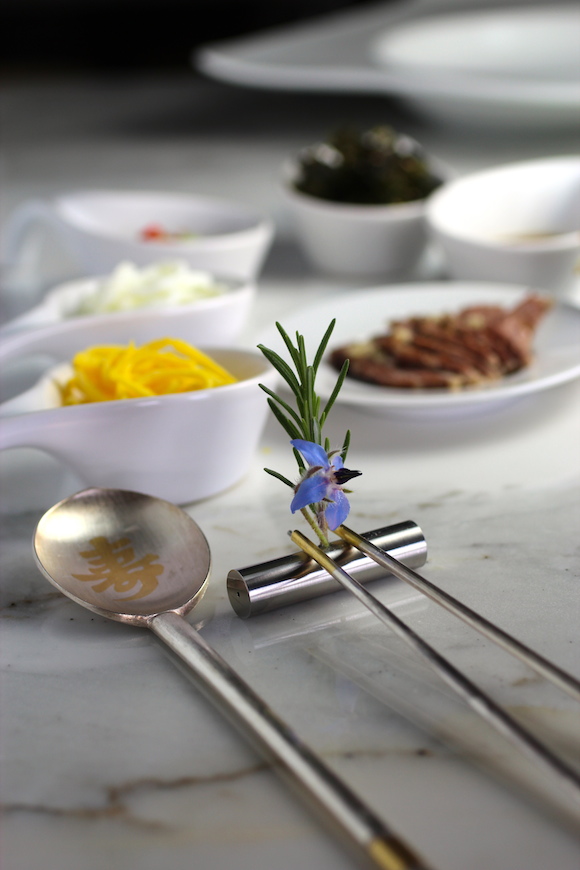 Finally, sprinkle the soup with scallions and chiles, and place edible flower on top. The borage comes from my garden. The flowers bloom pink but turn a striking blue within 24 hours. The blossoms are edible and have a mild cucumber-like taste. 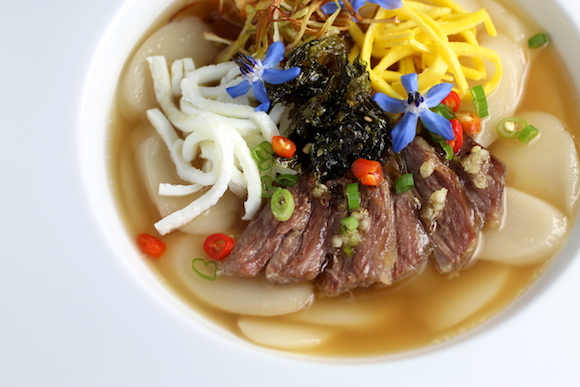 Notice the heart-shaped scallion at 7 o’clock in the photo above?

Wishing you a New Year full of love… 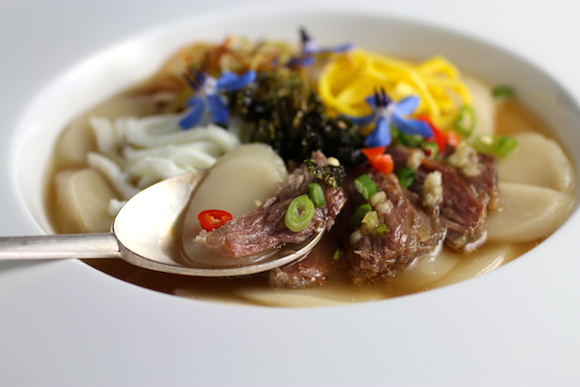 © Lori Lynn Hirsch Stokoe and Taste With The Eyes 2007-2022. Unauthorized use and/or duplication of this material without written permission from this site’s owner is prohibited. Excerpts and links may be used, provided that full and clear credit is given with specific direction to the original content. All photography on this site is copyrighted material.