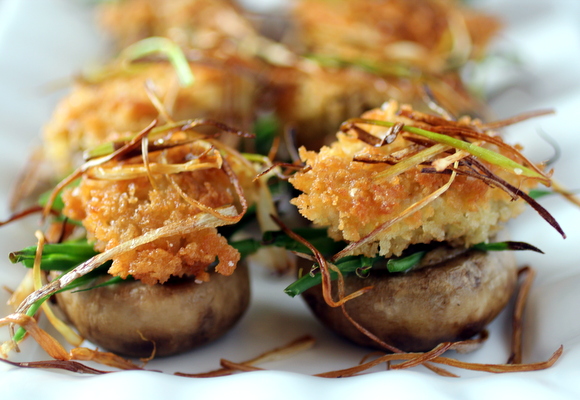 My friends in the 5 Star Makeover Cooking Group have made some major changes to the iconic green bean casserole this year. Major. For our monthly challenge we’ve taken the classic casserole recipe, originally made with green beans, mushroom soup, and fried onions and turned it ON ITS HEAD. There are soups, quiche, gnocchi, pancakes, and catfish ~ some have a Latin twist, another Asian, some are modern, some deconstructed, others retro. It’s a virtual cornucopia of casserole makeover creativity. And you can view all the incarnations of this most loved/hated Thanksgiving dish in the world over at Lazaro Cooks here. 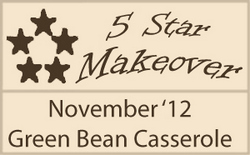 Here I remake the casserole into a bite-sized morsel which conjures up of all the memories of mom’s holiday dish but with a fresh twist and pair it with another one of our holiday traditions ~ fresh oysters. 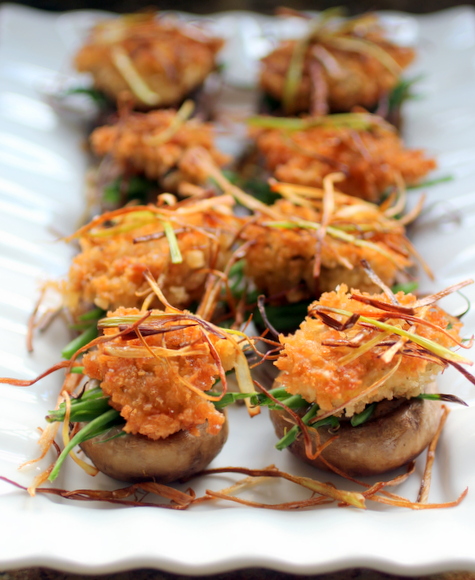 In this makeover, mushrooms are stuffed with earthy mushroom duxelles and a rich olive oil bechamel flavored with tamari. Bright steamed haricots verts are sliced thin and sit atop the mushrooms. Panko crusted fresh Fanny Bay oysters are fried in canola oil until crisp, then seasoned with truffle salt. Finally, frizzled leeks add texture and are an update to those canned fried onions . 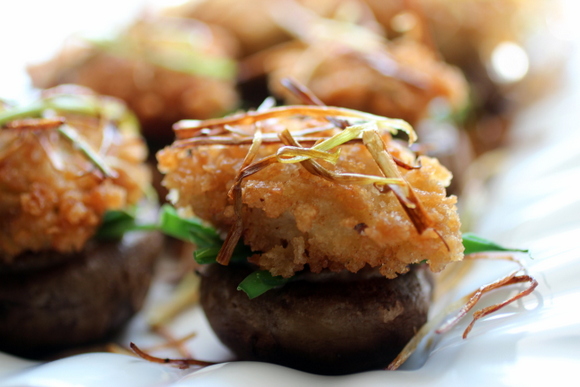 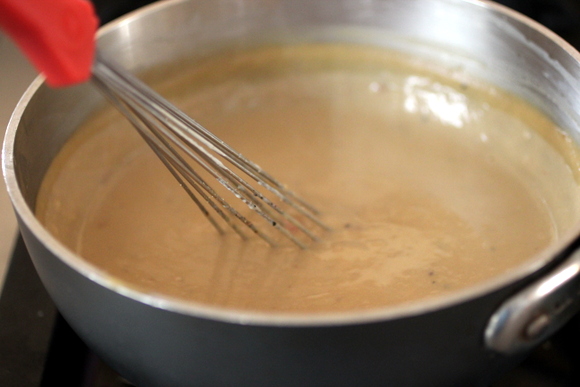 Saute shallot in olive oil until softened. Add flour, stirring, for about three minutes. Whisk in the milk and bring to a simmer, whisking until the mixture begins to thicken. Turn the heat to very low, and simmer, stirring often with a whisk and scraping the bottom and edges of the pan with a rubber spatula, for 10 minutes, until the sauce has thickened and lost its raw flour taste. Season with tamari and pepper. (Adapted from the NY Times here). 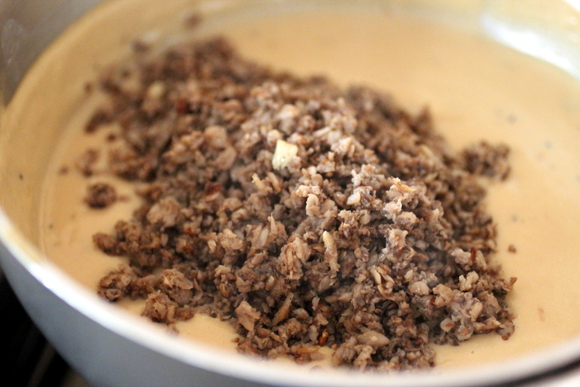 Stuffed Mushrooms: Remove stems from stuffing mushrooms and set aside. Rub mushroom tops with a small amount of olive oil and season with salt and pepper. Par-bake on a sheet pan stem-side-down at 350 for 10 minutes.  Remove from pan and dry off any accumulated water.

Mushrooms duxelles: Chop the reserved stems along with some whole mushrooms. Saute finely chopped onion and garlic in olive oil for a couple minutes then add the chopped mushrooms. Cook until browned then season with salt and pepper.

Place mushrooms back in pan stem-side-up. Fill caps with mushrooms duxelles and bechamel. Bake at 350 for 10 minutes until the mushrooms are soft and the bechamel is bubbly. 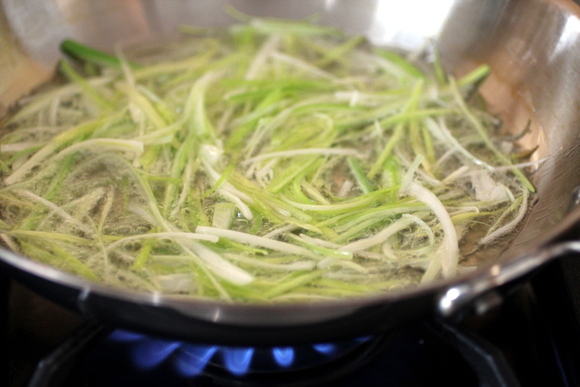 Meanwhile, fry thinly sliced leeks in olive oil until beginning to brown. Remove to a paper towel and season with salt. 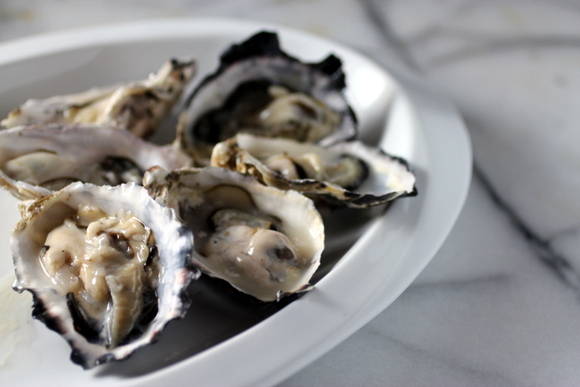 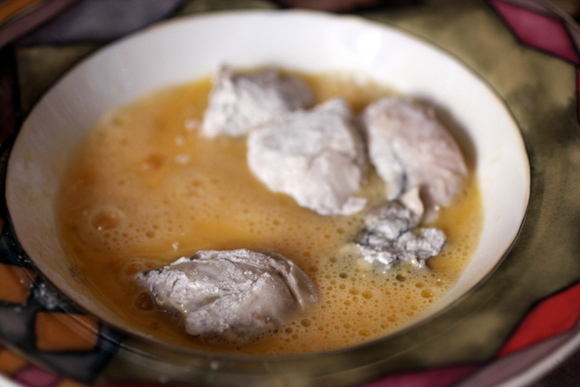 Coat fresh shucked oysters with flour, shake off excess. Dip in a beaten egg, then press the oyster in panko breadcrumbs to cover. Fry oysters in canola oil until golden brown. Drain on paper towels, season with truffle salt. 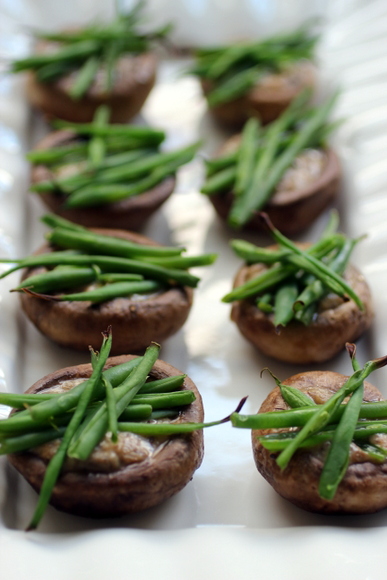 Steam haricots verts until crisp tender. Slice in half lengthwise, then in have again. Place beans on the hot mushrooms, return to the oven for a couple minutes to make sure the entire morsel is hot. 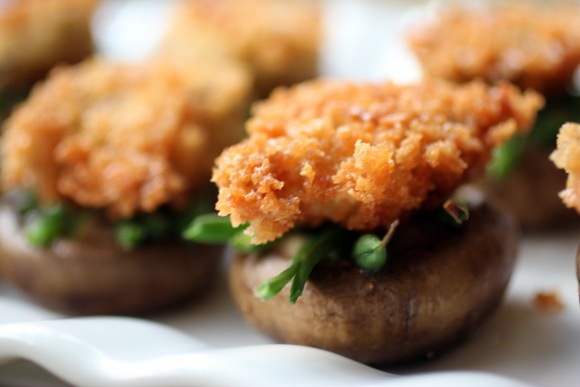 Place mushrooms on a serving platter. Top with the panko crusted oysters and finish with the frizzled leeks. 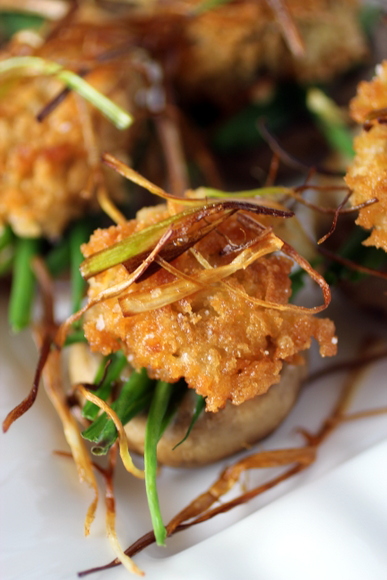 A bite-sized “green bean casserole” paired with another one of
our holiday traditions ~ fresh oysters!

We hope your Thanksgiving was warm, well-seasoned, well-prepared, and wonderful!