Andy Matsuda became a master sushi chef just when sushi’s popularity began to take off around the 1984 Olympic Games in Los Angeles. Up until that time, the palates of most Americans had not reached the point where they could fathom eating raw fish, no matter how fresh it was.

With the advent of fusion sushi cuisine, i.e. the California Roll, Western tastes became acclimated to sushi. Thirty years later, the traditional Japanese cuisine grew into an industry that grossed $2 billion in annual sales with sushi restaurants spreading to nearly every major city in the United States.

In 2002, Matsuda was one of those that helped the sushi grow with the opening of Sushi Chef Institute, a school designed to churn out chefs every two months to supply the $2 billion a year industry with capable chefs.

Becoming an itamae (sushi chef) in Japan may require at least five years of training and apprenticeship with a master. Only after several years is the apprentice allowed to prepare the sushi rice, once perfected can then go on to prepare and serve the fish and accompaniments. 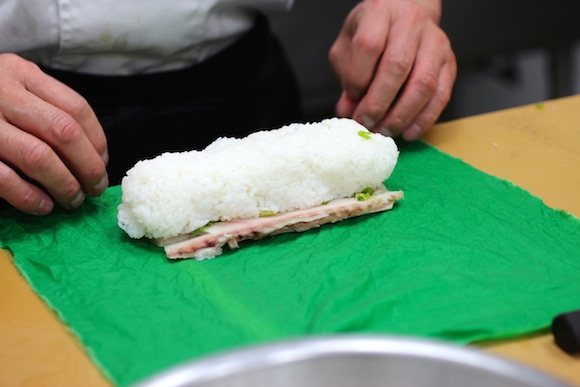 Sushi Chef Institute in Torrance properly trains a sushi chef in two months. While obviously not at the level of a Japanese itamae, the graduates are highly skilled, comfortable and confident. In those two months, students are immersed in a concentrated curriculum. Courses cover Japanese ingredients and stocks, popular Japanese cuisine, preparation of sushi rice, how to make traditional and modern (California/American) style rolls and sauce making for rolls. 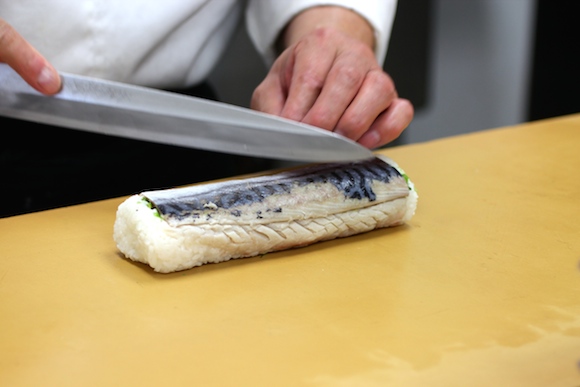 In an interview with Random Lengths following a class demonstration at the Torrance based school, Matsuda explained he had reached a point where he wanted to pass on his knowledge to a new generation of chefs.

“I would like to impart my knowledge of sushi to various people, in accurate and comprehensive manner, in order for them to discover new aspects of sushi and gain more interests in this field,” Matsuda said.

“I hope to instill the core of my teaching philosophy, which is based on my profound appreciation for the nature, family and society, to people from all walks of life.”

The Sushi Chef Institute matriculated 1,200 graduates from more than 30 different countries since its founding.

Training focuses on the techniques to make and present nigiri and sashimi, and how to maintain and sharpen Japanese knives. Sushi bar simulation is conducted while attending school, giving students an outlook of what is it like to take orders from a customer and in turn create and serve their dishes. The importance of knowledge with food cost and estimation, hygiene management, catering operation and restaurant business management are other subjects covered in detail. 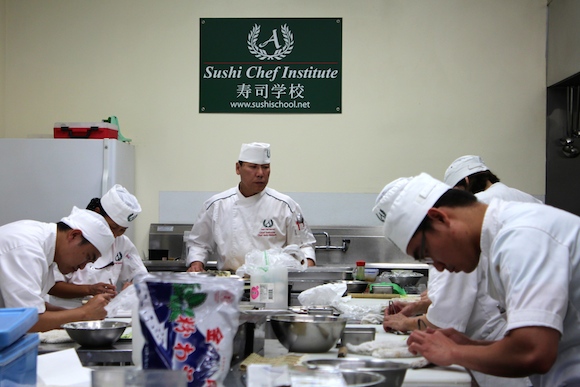 On this particular day in the professional kitchen, Matsuda demonstrates saba matsumae. Fresh mackerel has been marinated overnight in vinegar and salt. The bones and skin are removed. With precision, the chef shows how to butterfly the mackerel, then season with wasabi and garnish with thinly sliced scallion. He demonstrates how rice, the size of a baseball, is rolled between the palms to remove much of the air between the grains. The fish and rice are wrapped in cheesecloth and formed into a tight log. Matsuda teaches this technique, going back 600 years.

“The bamboo mats typically used to form sushi rolls today,” he said, “were not introduced until 200 years ago.”

He makes small thin cross-hatches with his razor-sharp knife on fish flesh, to let the flavor of terakabu (kelp marinated in sweet vinegar) seep in. He dexterously slices the roll and beautifully arranges it onto a white platter.

Consumers may not fully appreciate the nuances of sushi rice, but by the end of their education, students will have learned how humidity and altitude affect the rice preparation, as well as whether it is a new or old crop. They even will have learned how to tell if the rice is cooked with gas or electric heat and the bearing that each would have on the finished product. Once the variables and techniques are mastered, the student can prepare sushi rice with consistent quality in almost all conditions and locations. 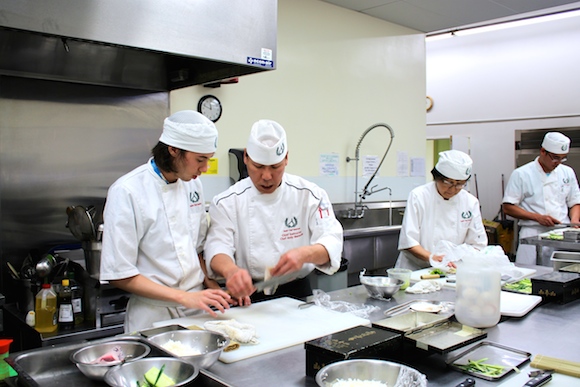 Nigiri is a slice of raw fish pressed over vinegared rice which in Japanese means two fingers (ni = two, giri = fingers). Nigiri sushi gets its name from the rice, which has to be of a very specific portion and fit on the chef’s “two fingers” when pressing. In learning the art of nigiri, students are taught how to meticulously slice or prepare more than 30 varieties of the various high-quality fish and shellfish, then mold the fish with hand-formed sushi rice resulting in an aesthetically pleasing, healthy treat for the sushi aficionado. 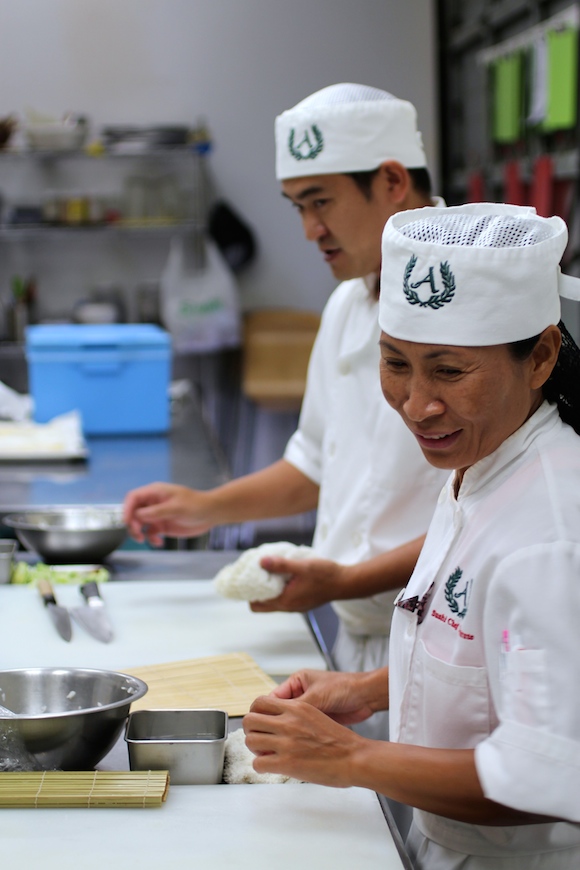 In addition to professional sushi chef training – private lessons, catering, and one-day sushi workshops are also offered. Groups of six to 25 people can spend two hours learning sushi techniques in the professional kitchen for $60 each, then sit down together and enjoy the fruits of their labor. 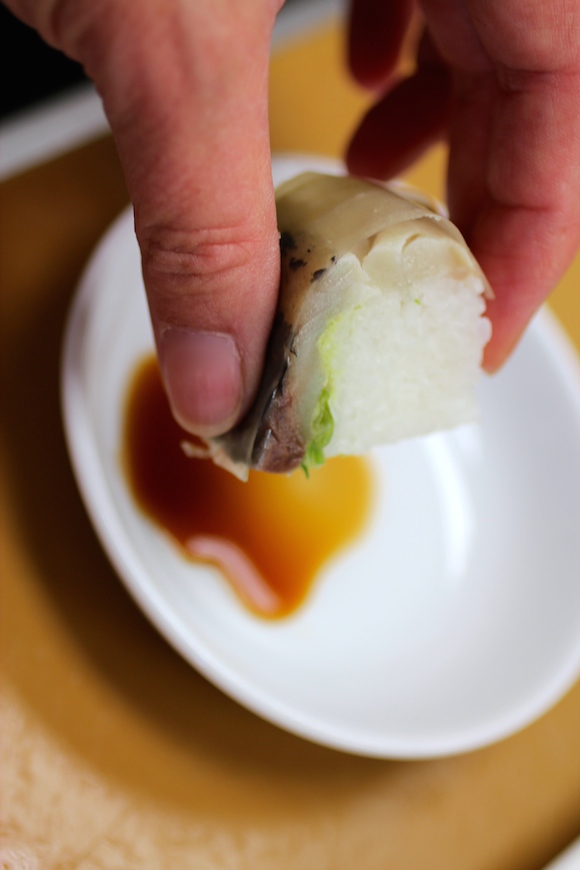 After two months of training under Master Sushi Chef Matsuda and his instructors, students receive certification and are now well-qualified to serve saba matsumae with all the other sushi delicacies. They will go on to receive job placement assistance and qualified graduates are eligible to intern for a month in Japan, enhancing their careers and filling much needed positions in restaurants throughout the country. 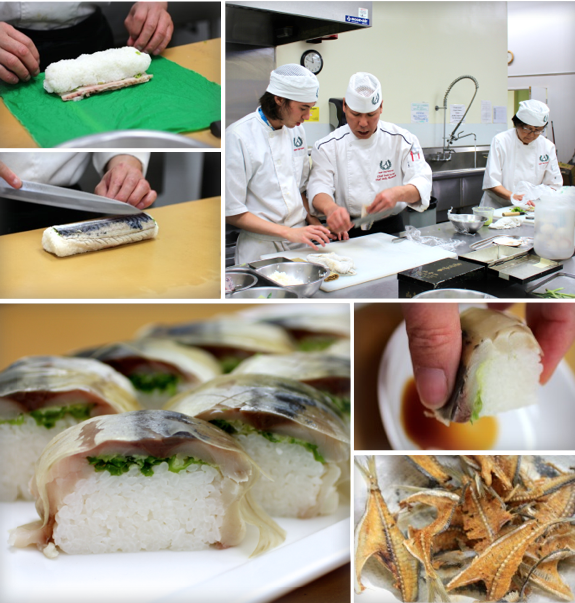 (from my column in Random Lengths News)