Vietnamese Beef Noodle Soup
“The aroma is captivating and the taste a deliberate collusion of salty, sweet, and umami all in one.” Ann Le 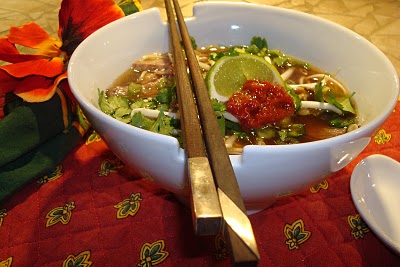 The star of this extraordinary soup is the broth. 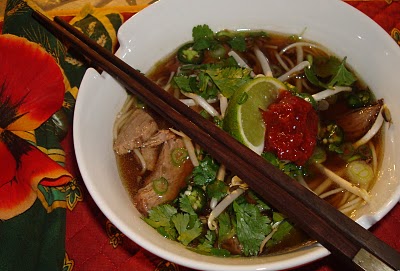 In a very large stockpot 3 lbs. beef short ribs and 2 lbs. oxtail are covered with water and brought to a boil.
Two large yellow onions and a knob of ginger root are charred over an open flame.
Toasted anise pods, cloves, peppercorns and smashed garlic cloves are wrapped in cheesecloth to make a spice bag.
The charred onions and ginger root, spice bag, cinnamon sticks, daikon, and shallots are added to the pot.
The broth is simmered for many hours. Then fish sauce, sugar and salt are added to taste, and simmered some more.
The fragrant broth is cooled and strained.

Cook’s Tip: The process takes quite a while, so make a large batch. After chilling overnight in the refrigerator, freeze a portion of the broth for another time.

The broth is re-heated and cooked noodles (traditionally flat rice noodles) are added.

Thinly sliced beef is cooked right in the bowl of hot broth. 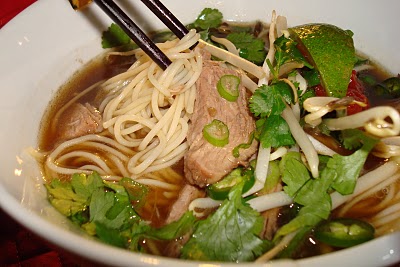 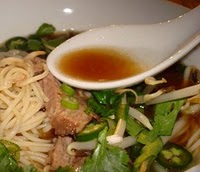 This recipe was inspired by Ann Le in the Little Saigon Cookbook, Vietnamese Cuisine and Culture in Southern California’s Little Saigon