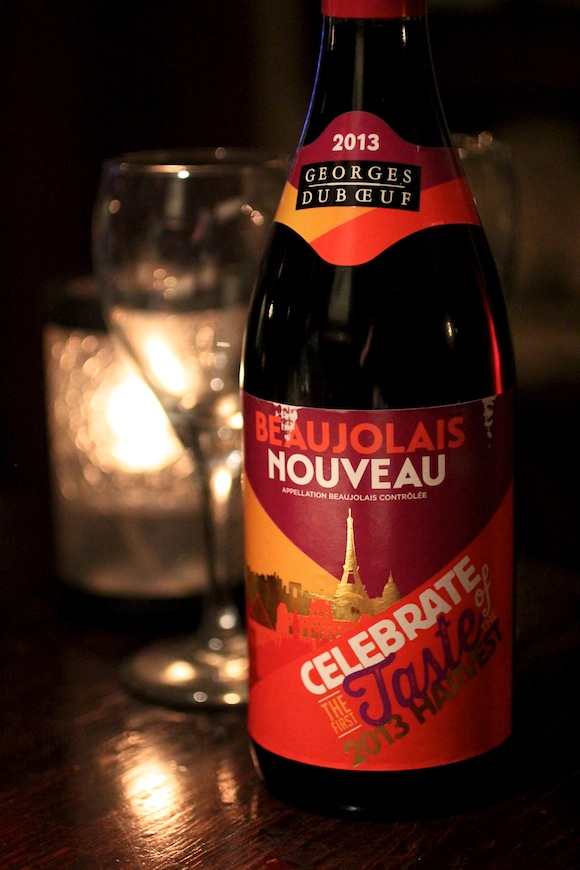 The third Thursday of every November – at one second after midnight according to French law – is when the recently-harvested Beaujolais is launched. Seventy million bottles are distributed around the world with the U.S. market being the largest importer of the nascent wine. Made from the red Gamay grapes grown in the Beaujolais region – it is a wine that is young and fresh and fruity. A light to medium-bodied wine not to be taken too seriously. It is a wine to enjoy tout de suite.

Easy drinking and not complicated – this wine can be quaffed on its own or sipped with foods. We had the opportunity to taste this 2013 harvest and we were all pleasantly surprised. It is a young wine – that is evident – so there is little in terms of bouquet. But the flavors are quite nice – with hints of red fruits such as cherries and berries and a bit of spice. It is balanced with light tannins resulting in a surprisingly nice structure on the palate.

Duboeuf, the self-proclaimed “King of Beaujolais” is the largest producer by far, with 125,000 cases imported, this wine should be readily available at local retailers during the month of December. This lively bottle will pair well with roasted turkey and is great to have on hand all through the holiday season when friends stop by. But don’t plan to cellar it – this baby is meant to drink young. Consider consuming your last bottle by New Years Eve.

The 2013 release is unique in that the harvest was 2 to 3 weeks later than usual as a result of a rainy spring season which delayed flowering. Hail storms damaged vineyards throughout the region, resulting in a lower grape yield. Low yield can result in a more concentrated wine with a better structure. And fortunately for the producers, a warm September prolonged the growing season which allowed for a more balanced maturation of the grapes.

While not considered the most spectacular vintage, the 2013 is definitely refreshing and tasty and worth seeking out.

One thought on “Celebrate the First Taste of 2013 Harvest”