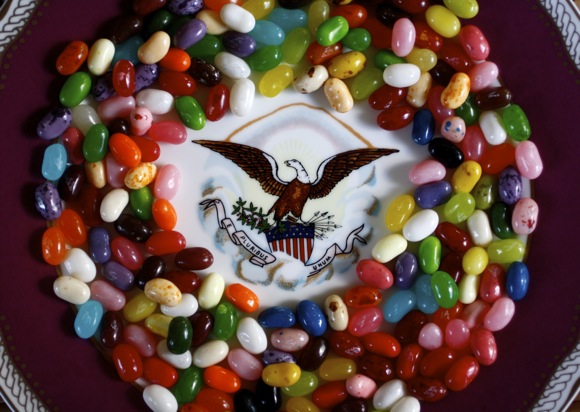 Dear Mr. Reagan:
Thank you for your eternal optimism, strong yet gracious leadership,
your championship of freedom, and unwavering love for and belief in our Country.
Happy 100th birthday Sir!
Yours Sincerely,
Lori Lynn

In 1861 Mary Todd Lincoln commissioned the Lincoln White House China of white porcelain with a scalloped edge, a hand painted solferino (red-purple) rim and gold rope border. The center is decorated with clouds, an American bald eagle with wings outstretched, holding arrows and olive branches in its talons, standing atop a shield with stars and stripes, with a banner bearing the national motto “E Pluribus Unum.”

E PLURIBUS UNUM – Out of many, one.

Ronald Reagan’s favorite presidents were George Washington, Abraham Lincoln, and Calvin Coolidge. He disliked liver, Brussels sprouts, and tomatoes. His favorite candy was jelly beans, his favorite flavor jelly bean – licorice. He loved the soundtrack from The Sound of Music and Rudyard Kipling’s If. In addition to jelly beans, he was very fond of chocolate cake, macaroni & cheese, meatloaf, eggplant lasagna, and split pea soup. 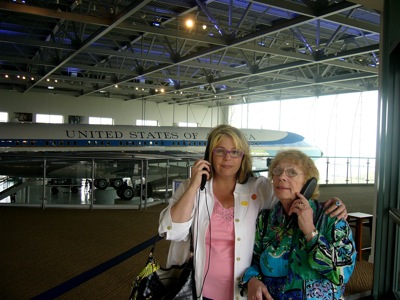 In 2006 my mother and I visited The Ronald Reagan Presidential Foundation & Library in Simi Valley, California. Here we are listening to an audio tour in the hangar of the Reagan Era Air Force One. We were delighted to be able to tour the plane, and guess what, there is a jar of jelly beans there on Mr. Reagan’s desk! 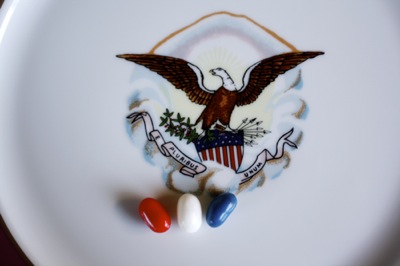 The Red, White, and Blue

The blueberry flavor was created for Ronald Reagan’s presidential inauguration in 1981 so red, white, and blue jelly beans could be consumed during the festivities. The first jelly bean was created by an unknown American candy maker in the 1800s. An 1861 advertisement recommended sending jelly beans to soldiers fighting in the Civil War.

“All great change in America begins at the dinner table.” 1989
“We the People tell the government what to do, it doesn’t tell us.” 1989
“Peace is not the absence of conflict, but the ability to cope with conflict by peaceful means.” 1982
“Freedom is one of the deepest and noblest aspirations of the human spirit.” 1985
Ronald Reagan

Today we honor and celebrate the life of a great American.

My Patriotic Presidential Posts:
I recreate one of the dishes served at the Fourteenth Annual Lincoln Dinner in 1900 here:
Lincoln Dinner at Delmonico’s, February 12, 1900
I cook a special birthday meal for President Lincoln here:
Happy 200th Birthday Mr. President
A recreation of the 2009 Inaugural Luncheon at Statuary Hall here:
Our Inaugural Meal