“I think it is a sad reflection on our civilization that while we can and do measure the temperature in the atmosphere of Venus we do not know what goes on inside our soufflés.” —Nicholas Kurti

It’s the ultra-modern style of cooking. Although, all the way back in the 1800’s cooks and scientists were interested in understanding food chemistry. But it was not until 1988 that the term “Molecular Gastronomy” was coined by French chemist Hervé This and Hungarian physicist Nicholas Kurti. They began holding workshops to investigate the transformation that occurs when food is cooked.

The molecular or modernist cuisine movement really began when chefs took those scientific discoveries and applied creativity to that body of knowledge. They take the basics of classic cooking and craftsmanship then apply chemical compounds and elements such as liquid nitrogen for instantaneous freezing and techniques such as spherification (forming a liquid into a solid orb which remains liquid on the inside) and gelification (turning a liquid into a gelatinous form by using a gelling agent) to push the culinary envelope.

END_OF_DOCUMENT_TOKEN_TO_BE_REPLACED 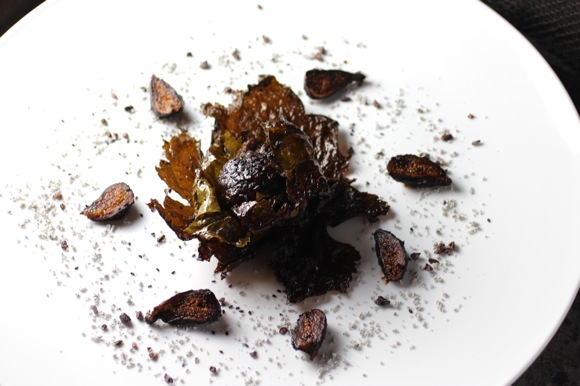 Of the seven courses we served at our fundraiser dinner, the black course is my creative favorite. I looked to Mexican cuisine experts – Chefs Rick Bayless, Patricia Quintana, and Javier Plascencia for inspiration. I learned about making sesame ash while Guest-Chef-for-the-Day at Moto Restaurant in Chicago last January and had been wanting to try Chef Homaro Cantu’s modernist technique in a dish ever since.  What appears to be ash is black sesame seed oil converted into a powder. It serves visual interest as well as a flavor complement to the sesame seed in the mole.