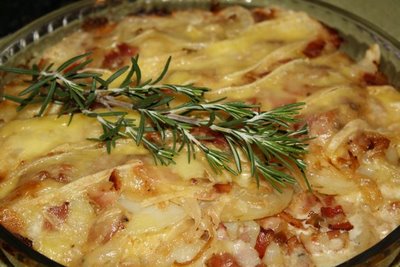 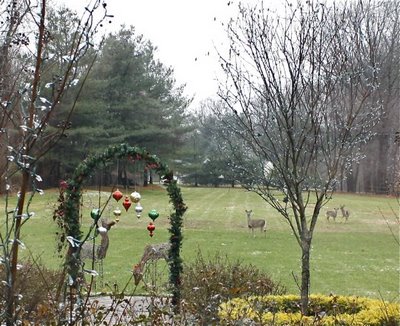 And while we were in the kitchen prepping our holiday meal, look who came to visit Susan’s back yard. Those are ornamental deer under the arch, and their live counterparts came by to check them out! See the three deer in the right of the photo? Magical! 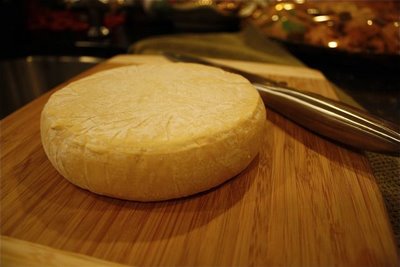 Reblochon is a raw cow’s milk cheese from the Alps region of Savoie. It is creamy, nutty, with full-flavor (somewhat stinky). In the middle-ages, farmers there were required to pay rent to the landowners in the form of milk and cheese based on production. The crafty farmers would hold back some of the milk until after the tax collector had left, then go back to finish milking the cows. This second-milking produced a richer milk, and was used to make their special Reblochon cheese. Cheese made from unpasteurized milk aged less than 60 days is not legally imported into the US, so we used a substitute cheese, Fromage de Savoie, made in the same manner but with pasteurized milk. 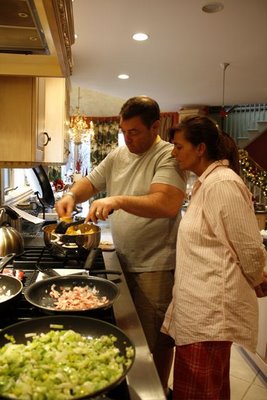 We had a fabulous time visiting Susan in New Jersey. We woke up early, had our coffee and began cooking. Everyone had an assignment which was loads of fun (and I sure appreciated the help)! Here my brother and sister-in-law are working on their projects. Don is making dessert; cooking quince, pears and oranges in a sugar and cinnamon syrup. Kristy is cooking the bacon for the tartiflette, and in the foreground, I am working on leeks and celery for the mussels. 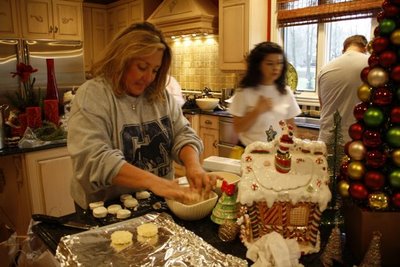 Meanwhile Susan is prepping the goat cheese medallions with egg wash and panko breadcrumbs. It will be refrigerated and ready to fry in peanut oil later on. And a big thanks to Esther (in the back) who is helping everyone keep a clean workspace. 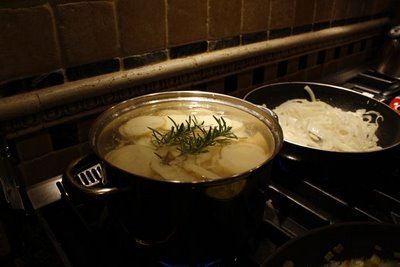 Kristy’s tartiflette turned out great: Sliced waxy potatoes are boiled in water until al dente. A sprig of fresh rosemary adds a nice essence. Sliced onions are sautéed in some of the bacon fat until golden brown, minced garlic is added at the end and cooked for a few more minutes. 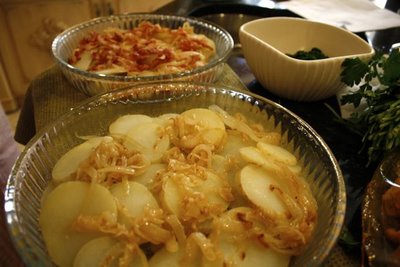 Layer potatoes in baking dish, then onions with garlic, then bacon. Season with a little salt and fresh ground pepper. 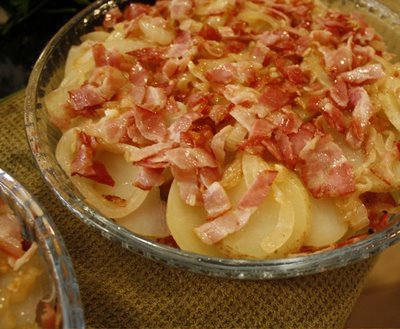 Repeat. Then about a half cup of cream is poured over the top. 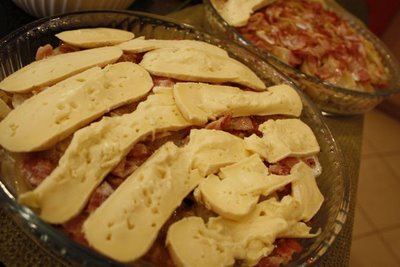 Top with sliced Reblochon/Fromage de Savoie. We recommend leaving the rind on. 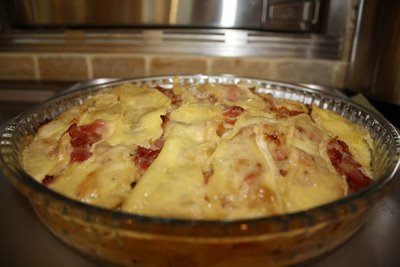 The tartiflette was baked at 400°F early in the day. Later we would put it back in the oven to heat right before dinner. I first saw this dish on Fiona Beckett’s blog and knew immediately it would be a big hit around here. For a more detailed recipe and if you are a cheese aficionado, do check our her blog and her excellent book, Cheese: From Fondue to Cheesecake which has inspiring recipes and beautiful photographs.
I was wondering why I hadn’t had this delicious tartiflette before, as I lived and skied in Aspen for 4 years after college. It is supposed to be a favorite of skiers after all? Fiona answers that question for me in her book, apparently tartiflette was invented by the local cheese commission in order to sell more Reblochon cheese, in the 1980’s! Well, that explains it.

Please come back soon to read more about the special dinner later that evening at Susan’s…
Happy Holidays to All!