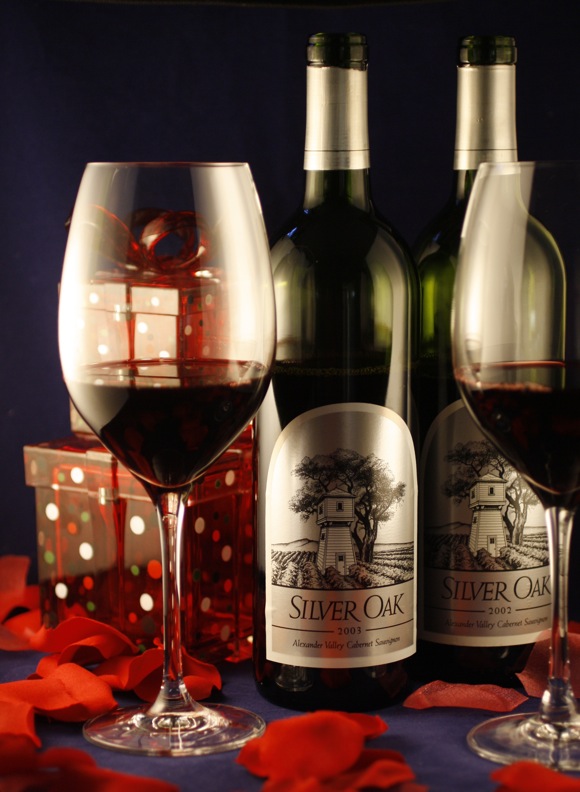 We are long time fans of Silver Oak Cellars. Balanced, complex, approachable, fruit-forward, full-bodied – are adjectives that come to mind when describing Silver Oak Alexander Valley Cabernet. This is one of the first wineries to age its Cab in 100% American oak barrels, resulting in a smooth, less tannic wine with a fresh spicy character. American oak aging gives Silver Oak its distinctive fruit-forward flavors and finesse. The Alexander Valley Cab is also 100% Cabernet Sauvignon, unlike their Napa Valley Cab which is blended with Merlot, Cabernet Franc and Petit Verdot. The Alexander Valley Cab is a blend of Cabernet Sauvignon grapes from different vineyards in the valley reflecting the best this appellation has to offer.

Winemaker’s Tasting Notes 2002
The 2002 Alexander Valley has a very dark garnet color and a nose of blackberry liqueur, violets, rose petals and spice. It is extremely rich and concentrated and has great depth and integration of tannin.

Winemaker’s Tasting Notes 2003
The 2003 Alexander Valley Cabernet Sauvignon is an elegant, highly expressive wine that displays great complexity due to the multifaceted climatic conditions of the harvest season. The wine is dark ruby with a purple to red edge. It has bright aromas of black cherry, dark chocolate, black tea, allspice and ginger. In the mouth, it offers a full-bodied attack, a round, balanced mid-palate redolent of cherry preserves, brown sugar and caramel and an extremely long finish of savory ripe fruit.

We were very fortunate to enjoy both the 2002 and 2003 vintages at A Foodie Christmas Dinner Party. And although both vintages were luxurious, the consensus was a leaning toward the 2003 vintage – which one guest described as “liquid velvet.”

4 thoughts on ““Life is a Cabernet” Christmas”