With the world’s largest lobster festival right around the corner and in our own backyard (The Port of Los Angeles), it was time to develop a new lobster recipe. Now while lobster is usually decadent, expensive, and reserved for special occasions, I sought to create a more humble lobster dish for everyday enjoyment. These 3.5 ounce lobster tails cost $6.50 each, while the rest of the ingredients are quite inexpensive – this hearty meal in a bowl can be served to company as well as enjoyed for a weeknight dinner. 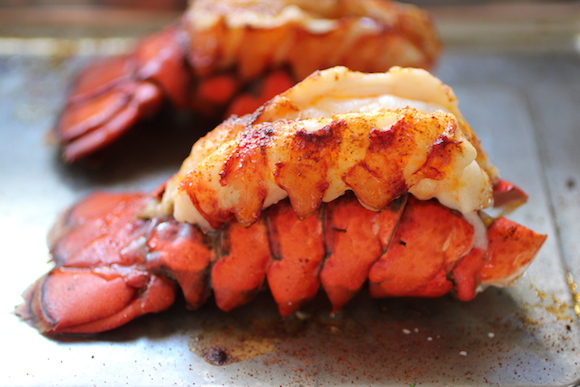 And in the process of research, I thought it would be neat to share a few interesting tidbits about our favorite crustacean: 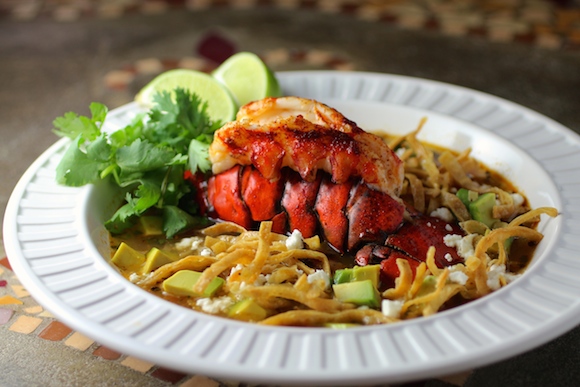 Why does the shell turn red when cooked? American lobsters in the wild are usually a brownish-olive green color with only a hint of red. The shell has a pigment known as astaxanthin which lends the red coloring. This pigment, along with other shell colors, helps the lobster blend in with the environment, protecting it from predators. It turns out that astaxanthin is heat-stable while the other pigments are not, so cooking the shell results in the bright red color that we equate with the delicious meal to come. 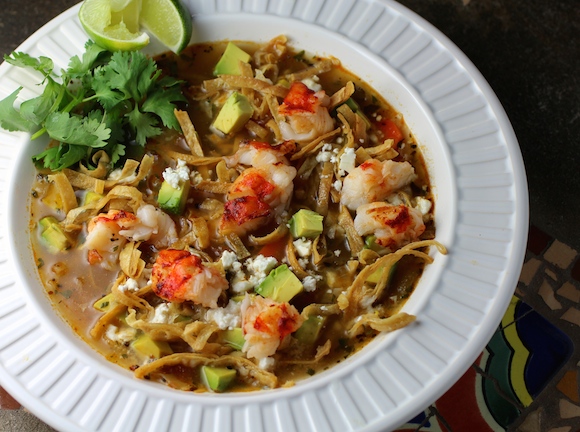 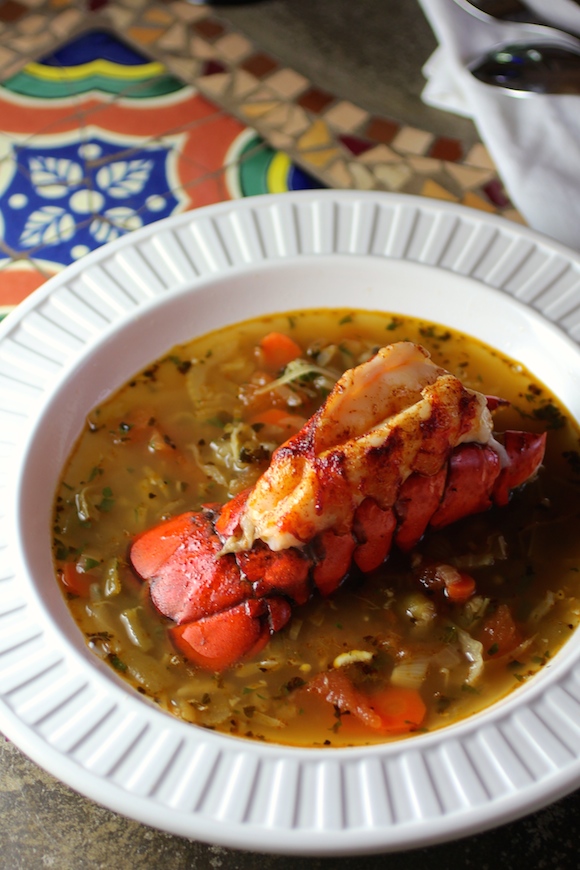 Sauté onion, celery, and carrots in olive oil until softened. Then add chiles and garlic, stirring and cook about 5 more minutes. Add ground cumin and dried Mexican oregano, these herbs are important for the authentic flavor.

Add lobster broth and bring to a boil, then reduce heat to a simmer for about 10 minutes. Then add shredded cabbage to the soup, and cook until the cabbage is just softened. Lastly, add tomatoes and chopped cilantro to the soup and turn off the heat. Add the juice of one lime and season to taste with sea salt. 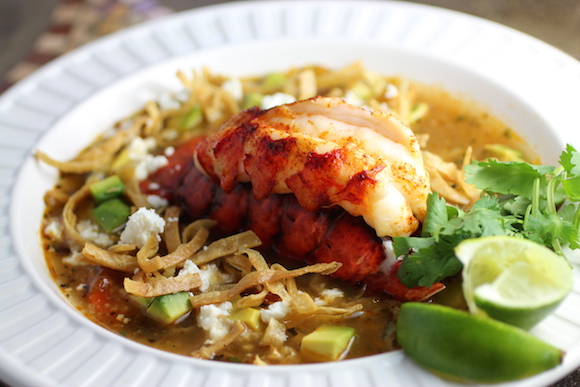 With a sharp knife, slice the lobster tail shell down the center, leaving the very tail end intact. Insert the knife just deep enough to graze the meat, creating a shallow split. Pry open the shell and lift out the meat, close the shell and place the meat back on top of the shell. Brush with olive oil, and season with chile powder and salt. Cook under the broiler until the meat is just opaque, taking care not to overcook. 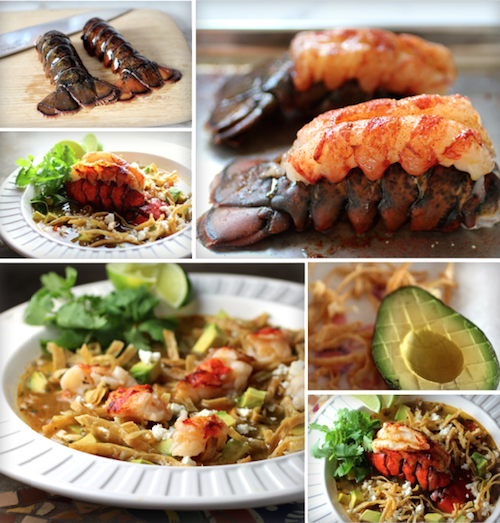 Corn tortillas are cut into thin strips then fried in canola oil. Drain on paper towels and sprinkle with a bit of sea salt. The fried tortillas are a key component, a bag of tortilla chips is an unworthy substitute! 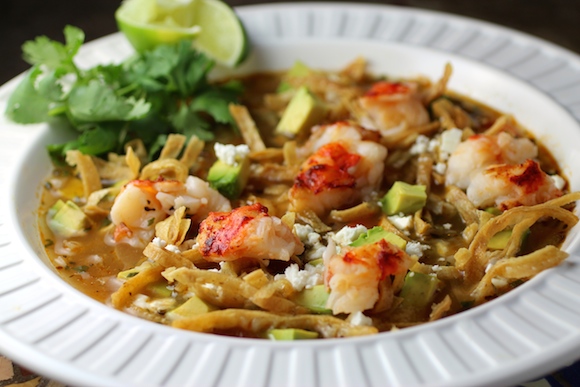 Ladle hot soup into warmed bowls. Place a lobster tail in the center. Sprinkle garnishes around the lobster.

Now, since we with taste with the eyes first, the entire lobster is served in the center of the soup. Presentation is everything, and lobster must be the star. Make sure to provide side plates with a knife and fork, so guests can remove the meat from the shell, slice it into bite-sized pieces and add it back to the soup. Buen provecho! 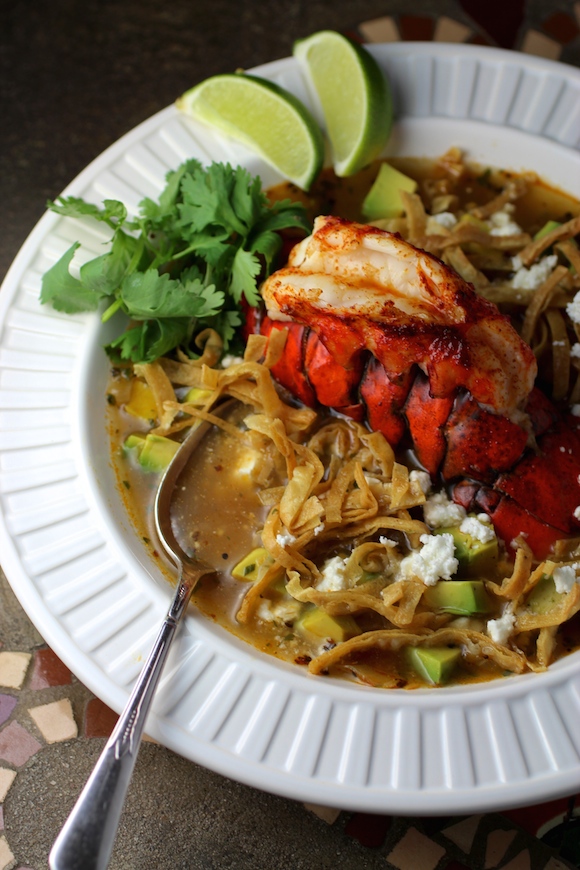 Summer Soiree is a season long franchise where Food Network editors team up with bloggers to share recipes about everyone’s favorite summer dishes. Be sure to check out the Pinterest Board with over 200,000 followers called Let’s Pull Up A Chair!

One thought on “Lobster Tortilla Soup”