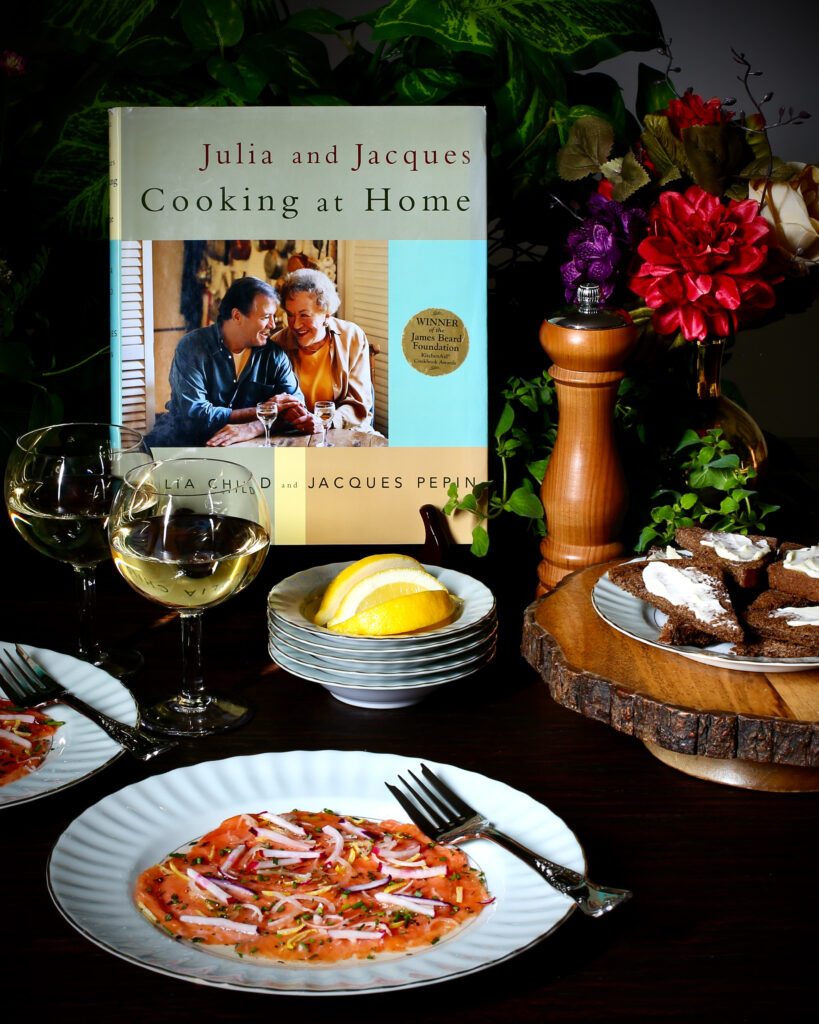 Joyeux Anniversaire Julia Child! Today would have been Julia’s 110th birthday. It has been an honor, a passion, and a tradition to celebrate her birthday on Taste With The Eyes ever since I started this blog in 2007.

This year, we are watching a super-charming episode of the cooking show Julia and Jacques: Cooking at Home “IT’S SALMON DAY!” where they go on to prepare a half-dozen salmon dishes together.

Here we are going to spotlight their gravlax presentations from the show and from their cookbook. Julia calls hers “Quick Gravlax” and Jacques calls his “Instant Gravlax.” Both different and both fabulous.

The television series was the inspiration for the cookbook of the same name. In both, one can sense the pleasure the two have cooking together, tasting, exchanging ideas, joshing with each other, and raising a glass to savor the fruits of their labor.

In this one episode Julia gives Jacques a hard time about using black pepper instead of white pepper in a light colored dish…and he gives it right back.

Jacques asks Julia to add salt and pepper to the salmon tartare they are making together.

“Would you rather have black or white pepper?” teases Julia.

“I do. I also like taste in the food and the black pepper has more taste than the white one,” retorts Jacques.

Again and again they demonstrate that cooking is endlessly fascinating and challenging, and while ultimately personal, it is a joy to be shared!

Gravlax is a Nordic dish consisting of salmon that is cured using a mix of salt and sugar. Gravlax translates to “salmon from the grave” which comes from the very old preparation method of burying the salted fish in the ground while it cured.

“I lived for about 2 years in Norway, which I loved, and this was one of their best foods.” JC

Slice the salmon as thinly as possible. Stir together salt and sugar in a small bowl. Lay the salmon slices on a large cutting board. Lightly season each slice with the sugar-salt mix and a grind of pepper. Moisten the slices with cognac. Turn the slices over and repeat on the other side.

Finely chop several sprigs of dill to make 1 to 2 tablespoons. Spread the rest of the sprigs on the serving platter. One by one, arrange the salmon slices flat, in an overlapping pattern covering the dill. Sprinkle the chopped dill over the slices, cover tightly with plastic wrap, and refrigerate for 2 hours.

With a vegetable peeler, shave lengthwise strips of English cucumber into long thin ribbons. Season with salt, sugar, and fresh ground black pepper then toss with a splash of white wine vinegar.

“Sugar brings out the flavor in cucumber. It does make a difference.” JC

Arrange cucumber ribbons around the perimeter of the salmon. Serve thin slices of pumpernickel bread and butter on the side.

Slice the salmon as thin as possible. Stir together salt, sugar, and pepper in a small bowl. Sprinkle half of the mixture evenly over the serving plates. Lay the salmon slices flat on top of the seasoning without overlapping. Sprinkle the rest of the seasoning mix evenly over the top of the slices. Cover the slices with air-tight plastic wrap, pressing the wrap so it adheres to the salmon. Set in the refrigerator to cure for a minimum of 20 minutes. Plates can be stacked on top of each other to save space, and for weight.

“Since I cure the slices with only salt, pepper, and a bit of sugar, I like to put a lot of garnishes on my instant gravlax just before serving.” JP

Sprinkle garnishes over the top of the salmon. Finish with a drizzle of walnut oil. Serve buttered pumpernickel and lemon wedges on the side.

The cookbook and the TV show have recipes that are not exactly the same. The recipes that I am sharing here are my best interpretation of those recipes combined.

I used smaller portions of king salmon fillets than called for in their recipes, and they worked fine.

For Jacques’s gravlax, if the salmon slices are too thick, put the slices between two sheets of plastic wrap and gently pound with a mallet to thin them out.

Jacques dilutes walnut oil with peanut oil to temper its strong flavor. We did not dilute it, and thought walnut oil was a revelation paired with the salmon.

“It was lovely to cook with you, Jacques,” said Julia.

“And with you too,” said Jacques.

Julia and Jacques Cooking at Home by Julia Child and Jacques Pépin, Published by Alfred A. Knopf, New York, 1999

I re-create her famous Cambridge, Massachusetts kitchen (now at the Smithsonian) and recipe for Vichyssoise (here)

2 thoughts on “Julia and Jacques’s Gravlax”