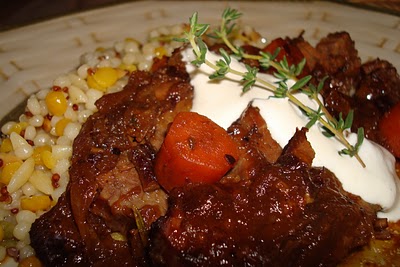 This sweet and savory brisket recipe was a big hit at the holiday dinner party. 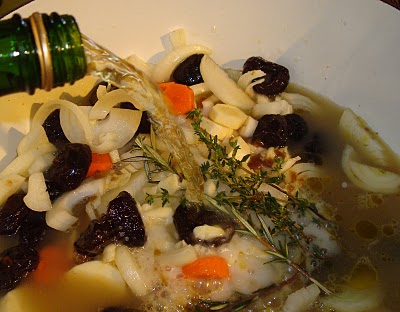 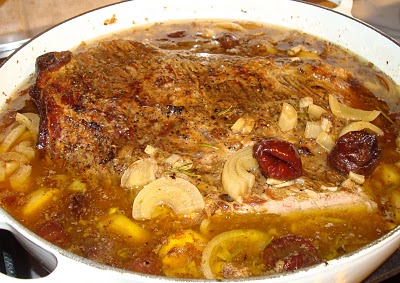 Brown the brisket under the broiler to get some caramelization then the meat goes into the Le Creuset French Oven, cover to cook for many hours at 200-225 degrees. This photo is about half-way done, had to take a peek (and a photo).

“Le Creuset has been the mainstay of French chefs as long as anyone can remember. Since 1925, the skilled craftsmen at Le Creuset have perfected enameled cast iron cookware. Each shape is one of a kind, made from molten steel and cast in a unique mold, and then expertly enameled. No other procedure yields cookware that so evenly distributes heat, browns and caramelizes food to perfection, and creates a masterpiece at the table.”

After several hours, 6 plus, remove the meat from the pot, cool, then store separately in the refrigerator overnight. Remember to remove the bay and the sticks from the rosemary and thyme.

Cook’s tip: Taste the meat, if it is not butter tender, keep on cooking slowly…

Day 2: Skim the congealed fat from the sauce then heat and reduce by half. Meanwhile slice the cold brisket against the grain.
Use an immersion blender to puree some of the sauce, leaving some vegetables whole. Adjust seasoning.
Place the sliced brisket in a roasting pan or Pyrex dish, add the sauce, cover and reheat. Serve with horseradish cream. 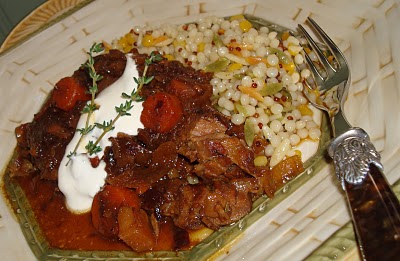 Happy Hanukkah!
No knife required… dahlicious, and so tenda!