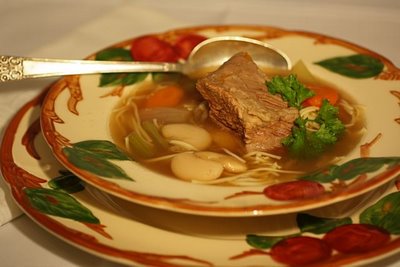 That was a big pot of Meat Soup I made a few days ago, so no surprise there are leftovers. But the real reason I am posting this soup again is the response and expressed curiosity in our family history. I am amazed and touched by your interest.
Franciscan Earthenware was a wedding gift to my father and his first wife. My mother “inherited” this china when she married him. She has been enjoying her home-cooked meals on this same china for well over a half century. She still has most of the pieces, a few are chipped, but overall a fine collection in great condition. This china has proven to be very durable. Ma even puts it in the dishwasher now! 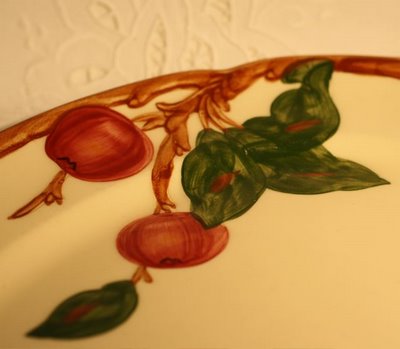 Franciscan Apple is one of the most popular raised-relief hand-painted patterns from Gladding, McBean & Co., which began production of Franciscan dinnerware in 1934 at their plant in Glendale, California. This pattern first appeared in 1940. Ma graciously has lent me several pieces from her collection. As you may have read earlier, I am addicted to dinnerware.
The name Franciscan is an allusion to Franciscan Friars and reflected the simple, informal style of Mexican folk pottery. The Franciscan Apple pattern has become a darling of collectors with its branches, beautiful green leaves and red harvest apples painted on cream-colored porcelain reminiscent of days gone by.
American production of Franciscan Ware ceased in 1984, following the announcement to relocate all Franciscan production to England. Franciscan Apple pattern is still made today under the Wedgwood Group. It is slightly different now and many pieces are larger than the originals, but still charming as ever. 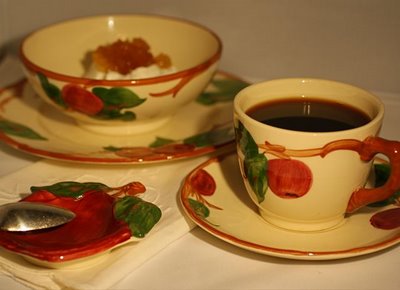