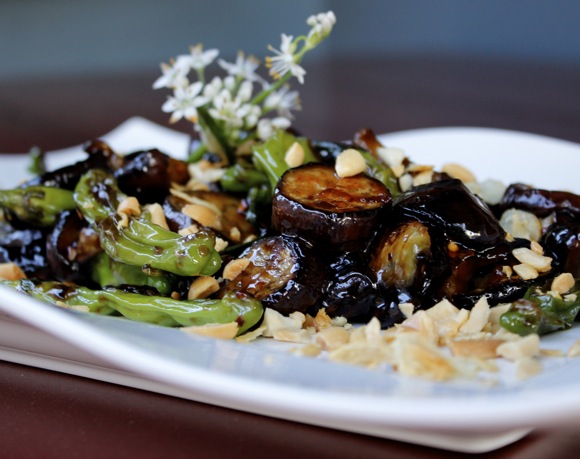 Back in August we had a most memorable meal at Wolfgang Puck’s Chinese Restaurant WP24. One of the many noteworthy side dishes was called “Hunan Spicy Eggplant, Roasted Shishito Peppers, Chili, Crisp Garlic.” Wanting to serve something similar at a recent dinner party but having no recipe, I decided to create my own interpretation of Wolfgang’s excellent side dish. It was a hit. 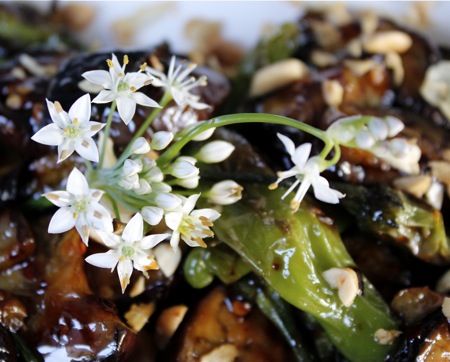 Cut about a pound of Japanese eggplant into large bite-sized pieces. Place in a bowl and sprinkle generously with Kosher salt. Toss and let sit for one hour to draw out the moisture. Rinse three times with cool water to remove the salt. Shake off excess water.

Sauté eggplant in a small amount of peanut oil in a large pan over medium high-heat, tossing occasionally, until cooked, about 10 minutes.

Meanwhile cook about a quarter pound of shishito peppers the same way in another pan until blistered. Sprinkle lightly with sea salt.

Add the Sweet Spicy Soy Glaze to the eggplant and stir to coat until the glaze become sticky, about one minute. Then gently toss in the shishito peppers.

Shishito Peppers are quite popular here; they are thin-walled and mild with just a whisper of heat. Every once in a while, though, you’ll come across a hot one!  This dish is so good, please don’t miss out if shishito peppers are not available by you. Green bell pepper would make a fine substitute. 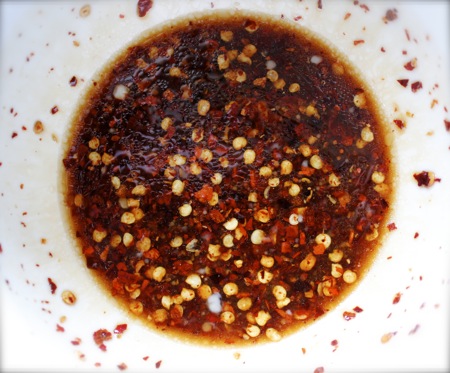 Mix all ingredients together in a small bowl. 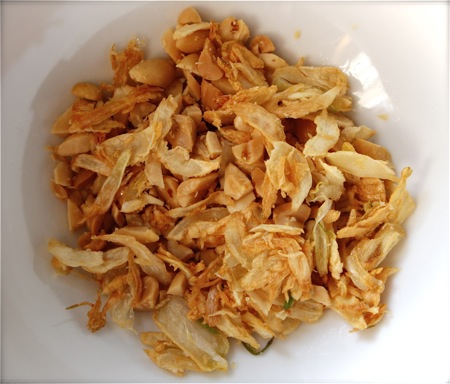 Shave 5 large cloves of garlic into paper-thin pieces. Sauté in peanut oil, stirring, until light golden brown, about one minute. Drain on a paper towel, season with sea salt. Mix about the same amount of rough chopped peanuts with the garlic.

This golden garlic has a bitter taste which one would think could be off-putting, but in a curious way it actually enhances the dish. The lesson: don’t doubt Wolfgang. I add peanuts to mellow out the garlic and add a nutty crunchy note. 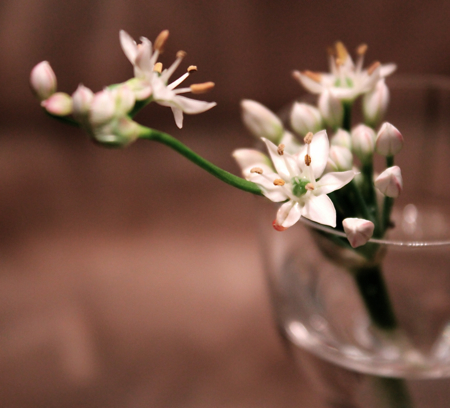 I planted Chinese Chives, also known as garlic chives (Allium tuberosum), in my garden back in July. They are just now starting to send up those long shoots that blossom into dainty little clusters of flowers. Unlike common chives, the leaves are flat rather than round and taste more like garlic than onion. The tiny blossoms are also edible but don’t be fooled by their diminutive size and pale beauty, their taste is quite strong and garlicky as well. 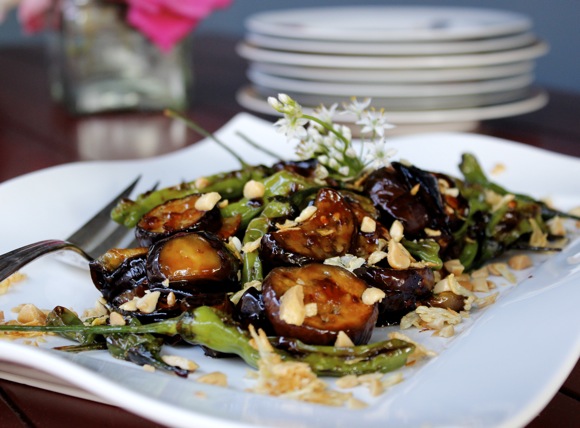 To serve: transfer the eggplant shishito mix to a platter. Sprinkle with crispy garlic & chopped peanut topping. Garnish with a stalk of Chinese chive blossoms and separate a few individual flowers and scatter them about the dish.

Sweet & spicy yes, but also crispy, sticky, nutty, silky, garlicky, crunchy, salty, and even a little bitter (in a good way). Your guests will like this.