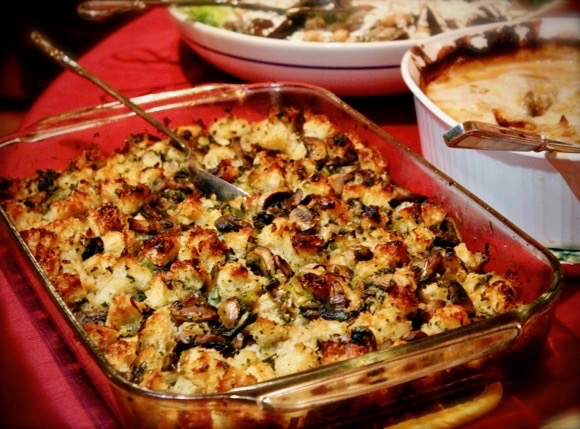 The Stuffing Everyone Loves!

It’s been 5 years since I’ve shared The Stuffing Everyone Loves recipe. So for 2016, it’s back!

What makes this recipe different from the familiar mushroom sage dressing served on dinner tables all over the country at this time of year? Not much, and that is the beauty of it. It’s just like you remember, only better. And everyone loves it.

Rustic ciabatta, with its porous, chewy texture is the perfect bread for this stuffing. A homemade rich-flavored giblet stock, eliminates the need to cook the stuffing inside the turkey, while retaining that classic turkey flavor.

A 50-50 ratio of vegetables (mushroom, celery, onion, and leek) to the volume of ciabatta creates a balanced, not overly bready-y dish. Cooking the stuffing in a shallow baking dish allows for the desirable contrast of buttery toasty bread atop a moist stuffing beneath. Plenty of butter, Italian parsley and butter-fried sage bring the classic flavors of the season.

And with no “surprise” ingredients (oysters, nuts, fruit, chestnuts) it simply appeals to everyone…and exceeds expectations.

The Stuffing Everyone Loves Recipe

Remove the crust from two large loaves of ciabatta bread. Cut the bread into cubes about 3/4″ to 1″ thick. Place the cubes on a baking sheet and allow to dry out overnight, or place in a 200° oven until dried. Removing the moisture allows the bread to better soak up the flavorful stock.

Sauté onion, celery, leek, and mushroom separately in butter until soft, season with salt and pepper.

The vegetables are cooked simultaneously on the stovetop in separate sauté pans due to volume. In order to sauté properly, each vegetable is cut to a uniform size and cannot be overcrowded in the pan. Mushrooms are cooked separately to release their water, then to brown in the pan.

There should be as much vegetable mixture as bread. Let vegetables cool, then gently combine. This can be made a day ahead, then refrigerated.

Rinse and dry the turkey neck and giblets. In a small stock pot, brown the giblets and neck in a small amount of olive oil. Add 6 cups of purified water along with a rough chopped onion, celery rib, carrot, a couple bay leaves and a few whole black peppercorns. Simmer for two to three hours. Strain through a sieve and remove the fat.

Heat 2 cups of the stock with one stick of unsalted butter to melt the butter. Toss bread cubes with vegetable mixture. Pour stock/butter over the stuffing. Toss to moisten all the bread. Add more stock if necessary.

Add parley, sage, kosher salt and fresh ground pepper to the stuffing. Toss again then pack loosely in a buttered baking dish. Dot the top with small cubes of butter.

Although I am tempted to use one of my pretty casserole dishes, this is best baked in a large shallow pyrex dish (for a higher ratio of crispy crust). Bake uncovered 30-45 minutes at 350° until the top is browned and crispy. And keep an eye on it so it doesn’t burn. 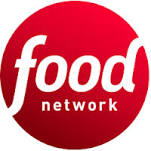 15 thoughts on “It’s Back – The Stuffing Everyone Loves!”