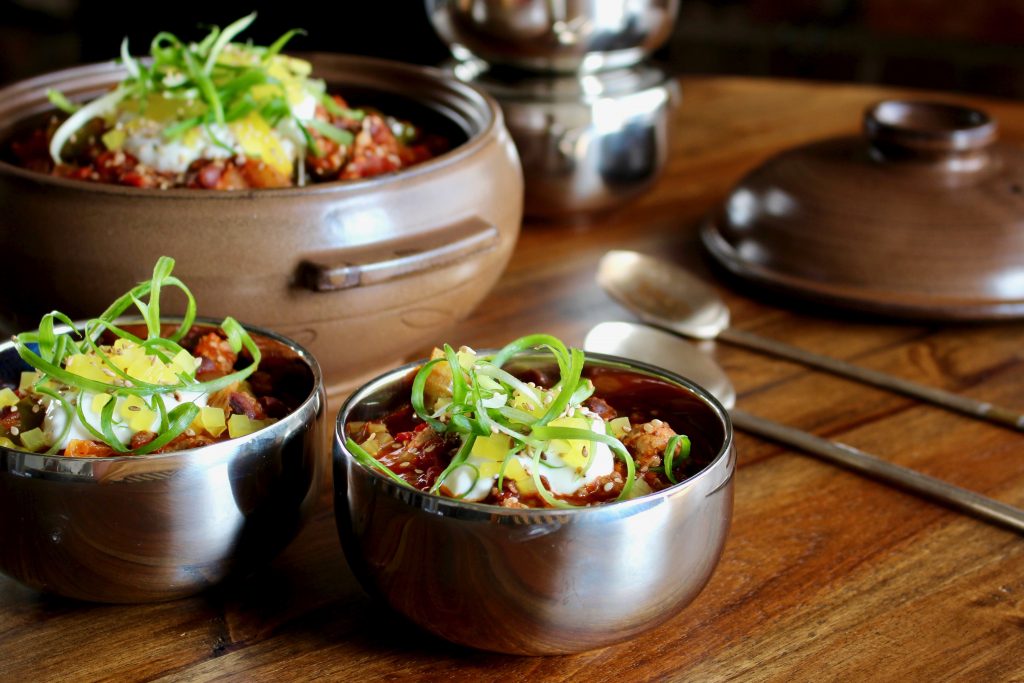 How’s your Korean food vocabulary? Gochujang, gochugaru, kkwarigochu, pat, kimchi, danmuji, pachae, chamgireum and bokkeun-kkae are some of the ingredients that transform a traditional chili con carne into this super-flavorful Korean Chili with a unique topping.

Gochujang and gochugaru are sold in varying degrees of spiciness. For this recipe, I use medium-hot heat level as shown on the packaging. Gochujang is a Korean red chili paste with sweet heat and a fermented umami richness. It has a balanced fruitiness, slight smokiness and depth of flavor from the sun-dried Korean red peppers. Gochugaru, also made from sun-dried red peppers, is a coarse-ground chili powder. Together, they give this chili its distinctive Korean spiciness. Kkwarigochu (shishito) are thin-walled mild peppers with a fresh green vegetal flavor and just a whisper of heat. But beware, every once in a while, there’s a hot one in the bunch! Kkwarigochu stand in for green bell pepper used in standard recipes. 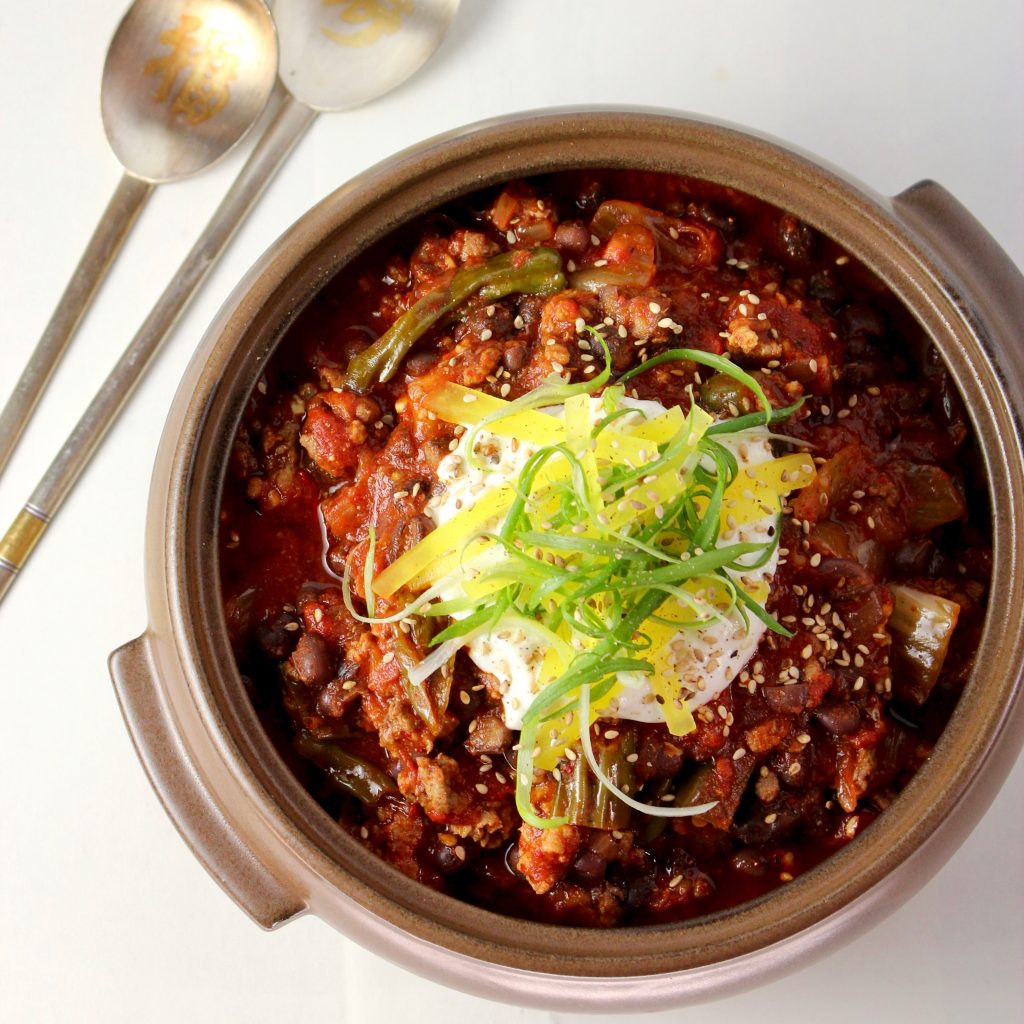 The usual Western chili toppings of onion, cheese, and sour cream are replaced with a Korean flair. Pachae (curled green scallion) stands in for the diced white onion. Yellow cheddar is replaced by danmuji, a yellow pickled radish that is sweet, sour and crispy. Thick tangy yogurt gets a punch from garlic and rich toasty notes from sesame oil. Finally bokkeun-kkae (toasted sesame seeds) add visual appeal, nutty notes, they are a common Korean garnish.

END_OF_DOCUMENT_TOKEN_TO_BE_REPLACED 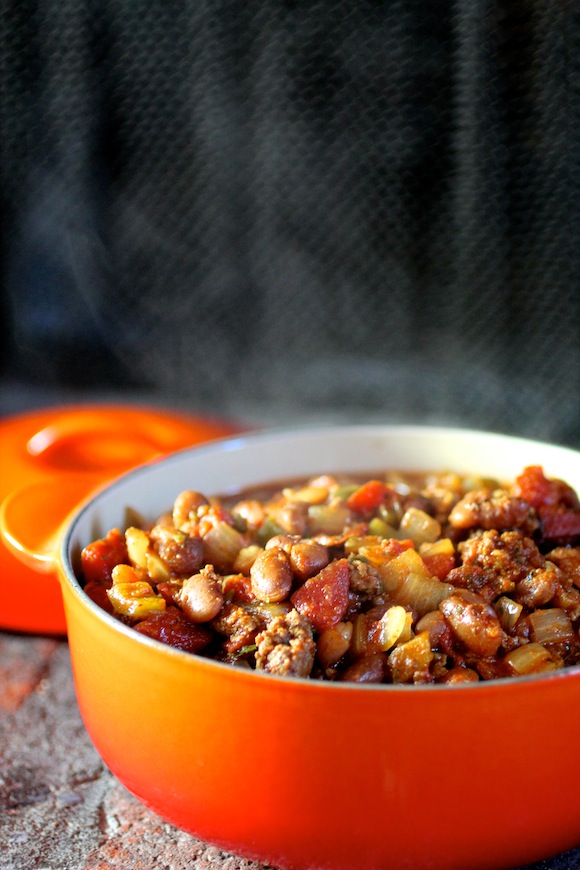 This recipe was loosely adapted from the Chasen’s Recipe, the famous chili that was shipped to Elizabeth Taylor when she was filming in Italy back in 1962. Heirloom cranberry beans and flavorful wild bison make this chili one that could be a contender in the next chili cook-off!

Smoked paprika and chili de arbol powder balance the chili with sweet smoke, earth, and heat notes. And I eschew the ubiquitous shredded cheese and diced onion topping for a silky poached egg. The runny yolk adds richness to the spicy stew. 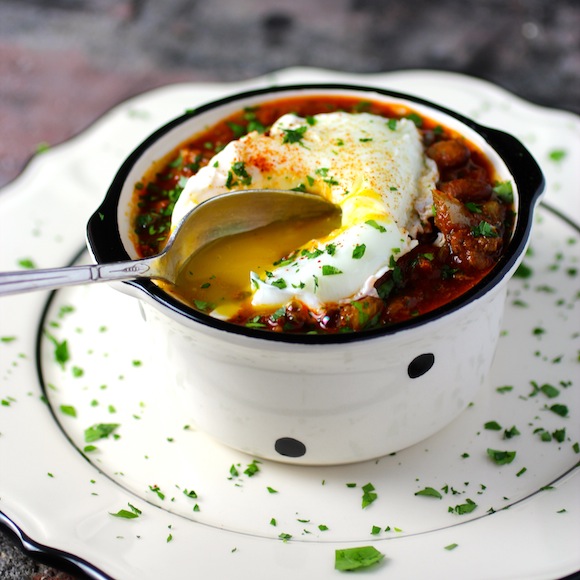 END_OF_DOCUMENT_TOKEN_TO_BE_REPLACED

What food did Elizabeth Taylor have shipped to her while filming Cleopatra on the set in Rome?

Ten quarts of chili. Yes, chili from Chasen’s Restaurant in West Hollywood! When she could pretty much order up anything she fancied, she chose the humble bowl of chili. That spicy stew with a history that goes back to the American frontier days has endless variations. Based on geography, legend, personal taste, and availability of ingredients recipes for chili vary widely but the passion for this beloved dish does not. 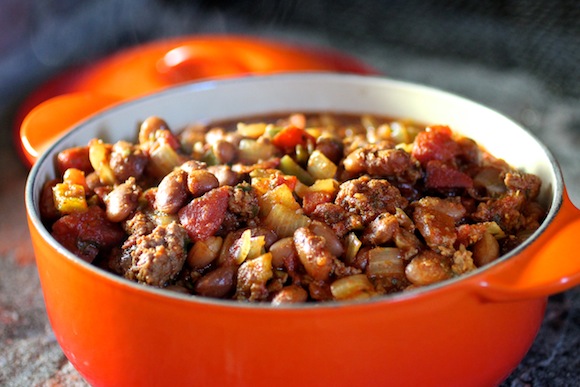