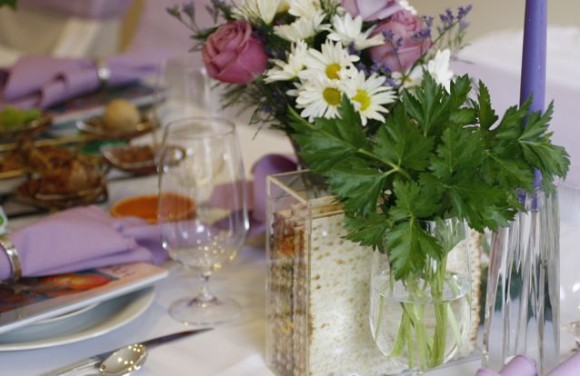 Karpas – A green vegetable such as parsley, a springtime crop representative of rebirth and redemption is dipped in salt water.  The salt water reminds us of the tears our ancestors shed as slaves in Egypt.

Matzoh – We eat matzoh on Passover to remind us that our ancestors left Egypt in such haste, they could not wait for the bread to rise. Additionally, matzoh is the “bread of affliction” – the food of slavery, it reminds us to be humble and to appreciate our freedoms.

My brother, Don, is the leader. Everyone participates. We read from the Haggadah. We recite the blessings. We tell the story of the Exodus from Egypt. My nephew, Stone, 7, asks The Four Questions. We sing. We drink. We eat. We laugh. We get teary-eyed. Our story is being retold all over the world on this day.

Here I share our Passover menu and some scenes from the Seder along with the significance of each ritual. And new this year: Come take a peek into our Seder. Watch a 45 second video clip of one of our Seder songs! 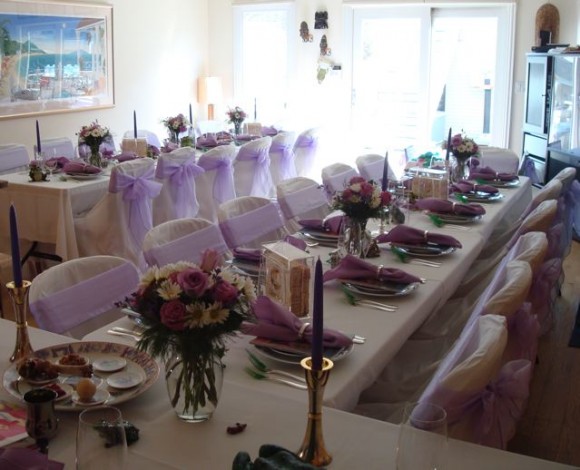 Since their marriage, Don and Kristy have been hosting our family’s First Night of Passover. While Kristy sets the most beautiful Passover tables, I have been the cook for all nine years (with lots of help from family and friends).

We have three Seder plates, two for the adult tables and one for the kids’ table. 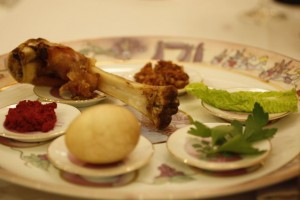 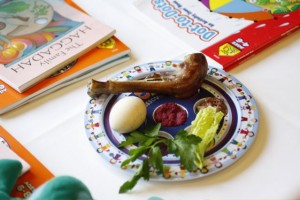 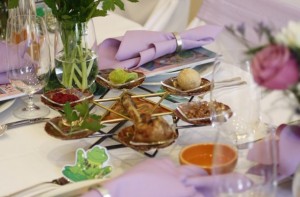 HOME VIDEO – A Peek Into Our Seder

In this 45 second video clip we enjoy singing The Ballad of the Four Sons to the tune of “Clementine.”

The song is about telling the story of the Exodus from Egypt to satisfy the needs of four different types of people:

Said the father to his children,
“At the seder you will dine,
You will eat your fill of matzah,
You will drink four cups of wine.”

Now this father had no daughters,
But his sons they numbered four.
One was wise and one was wicked,
One was simple and a bore.

And the fourth was sweet and winsome,
he was young and he was small.
While his brothers asked the questions
he could scarcely speak at all.

And the father proudly answered,
“As our fathers ate in speed,
Ate the paschal lamb ‘ere midnight
And from slavery were freed.”

So we follow their example
And ‘ere midnight must complete
All the seder and we should not
After 12 remain to eat.

Then did sneer the son so wicked
“What does all this mean to you?”
And the father’s voice was bitter
As his grief and anger grew.

“If you yourself don’t consider
As son of Israel,
Then for you this has no meaning
You could be a slave as well.”

Then the simple son said simply
“What is this,” and quietly
The good father told his offspring
“We were freed from slavery.”

But the youngest son was silent
For he could not ask at all.
His bright eyes were bright with wonder
As his father told him all.

My dear children, heed the lesson
and remember evermore
What the father told his children
Told his sons that numbered four. 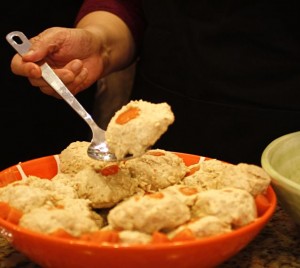 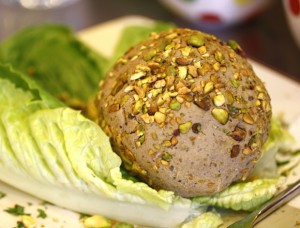 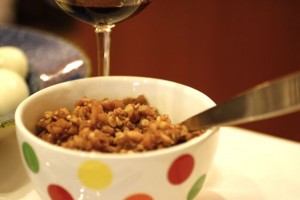 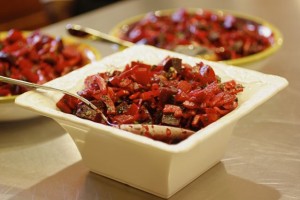 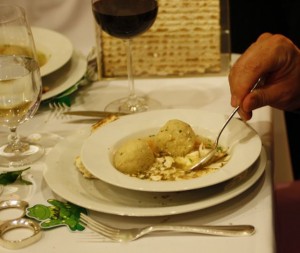 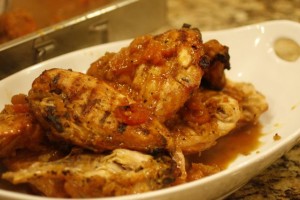 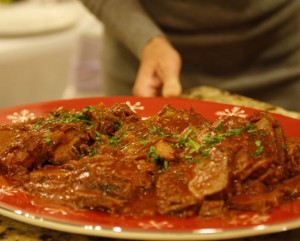 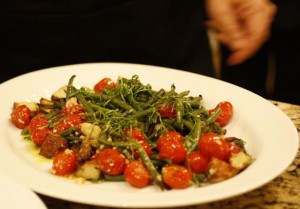 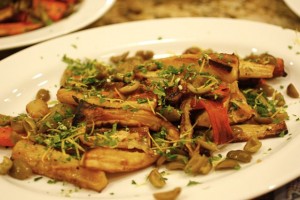 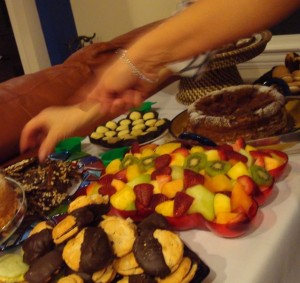 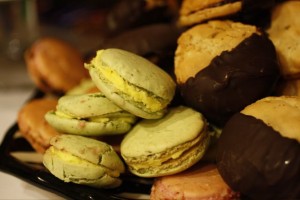 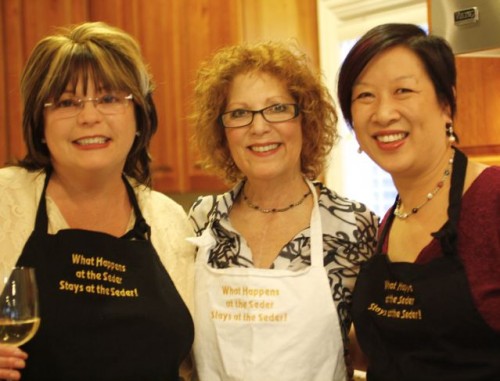 SCENES FROM THE SEDER 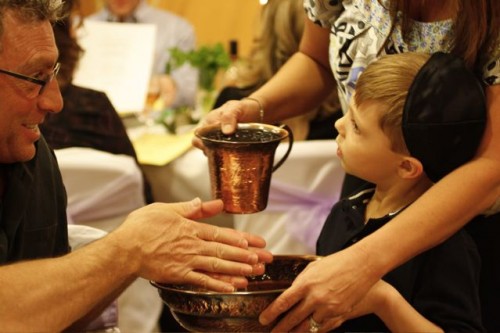 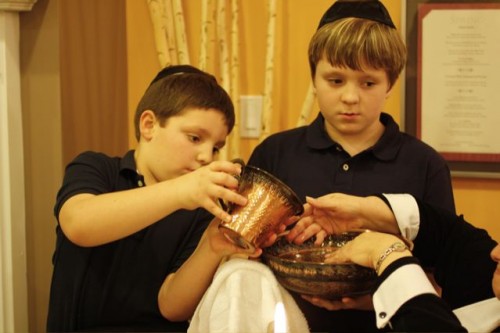 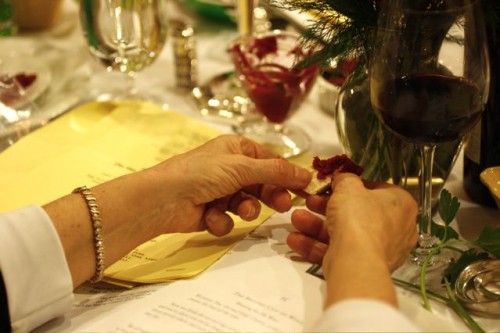 A blessing is recited over a bitter vegetable (horseradish). This symbolizes the bitterness of slavery. The maror is eaten with haroset, a mixture of apples, walnuts, cinnamon and red wine, which symbolizes the mortar used by our ancestors to build structures for Pharaoh.

Please stop by later in the week for some recipes from our Passover dinner!
A special thanks to my dear friend Peggy, for taking wonderful photos while we were busy in the kitchen.