Poor Wilson was brutally attacked by another dog, his eye severely damaged. And then, as if things couldn’t get any worse, his previous owners decided to dump him at a shelter. Boston Buddies (Southern California Boston Terrier Rescue) rescued Wilson, but their veterinarians were unable to save his eye. Yet, in spite of his bad experience, Wilson was a love bug.

After reading about Wilson on their website, I contacted Boston Buddies to say I was interested in him. I was told that he had already found his “forever home” and would be going there the next day. So, please, choose another dog. But I didn’t really have an interest in another dog, so I waited. A couple days later I got a call to say that his “forever home” had fallen through and could I meet him that day? I said that I was going to be out of town for the weekend and could take him on the following Monday. It turned out there was another family that wanted to take him that day, so he was placed with them. When I got home from the trip I received another call saying that Wilson did not get along with the other dogs in the home and did I still want him? YES! I WANT HIM! It sure seemed like we were meant to be together. That was in March of 2006, and he was three years old.

This past year, Wilson had been struggling with breathing issues. In October I wrote a post on the Doggie Treats I made for him while he was recovering from everted laryngeal saccule removal and stenotic nares resection surgery. But a week ago last Sunday at 3:30 AM he had a seizure probably due to lack of oxygen. I revived him, calmed him, and he seemed to be doing better. Late Sunday night his breathing had gotten worse so I took him to the emergency hospital so he could be put in an oxygen tent. The doctors gave him a sedative along with the oxygen. On Monday morning he had a pulmonary specialist and a surgeon try to determine the cause of his problem. It was not in his upper airways as originally thought, so the issue was then determined to be in his lungs. A camera down his trachea determined that he had blood clots in his lungs and was/ would be drowning from the blood. He was under anesthesia when the doctor told me the sad news. Heartbroken, we decided to end his suffering then, at 6:30 PM Monday, December 10th.

Wilson was a sweet wonderful companion. I miss him terribly. We walked all over San Pedro together. As his breathing got more difficult, those walks became shorter. But even on the Saturday before he died, we had a nice, slow and easy 4 block walk. He was happy. Often times I would let him choose the direction. We would walk out the front gate and I would ask him, “Which way today?” He would lift his head and sniff the air, then go in the direction of his choosing. He had doggie friends throughout the neighborhood. Even if we hadn’t been on a particular street in months, he still remembered where all his canine friends lived. He would cross the streets, sometimes even jay-walking, to visit his friends in their yards. Bruiser the English Bulldog and Sydney the Dalmatian were among his favorites.

The most interesting story about Wilson and his walks happened exactly a year ago. At Thanksgiving 2011, my brother loaded Grant Achatz’s ibook, next ~ paris 1906, onto my ipad, with its gorgeous photos and recipes from Achatz’s fleeting restaurant “Paris 1906” in Chicago. But over that Thanksgiving holiday, with all the guests and all the cooking, I did not have time to read it. About a month later, in December 2011, I finally took the time to read that sublime cookbook. Every single dish was exquisite, but there was one in particular that captivated me. Potage a la Tortue Claire, a turtle soup made with aged madeira. The serving vessel so elegant, the garnish so beautiful it took my breath away. The soup is poured tableside. There were tiny yellow fennel flowers, chervil leaves, perfect little cubes of rutabaga and carrot, and a blue borage flower. That flower! I was smitten. Did they grown in Southern California? Could I grow them in my garden? I immediately went online to learn more about beautiful borage.

Now it was late morning and Wilson was excited to go for his walk. He had this cute way of letting me know ~ with the top of his head, he would go under my desk and push my keyboard back. “Hey Ma, enough with the computer, let’s go for a walk.” OK, little buddy, in a few minutes, I just want to learn a bit more about this borage… 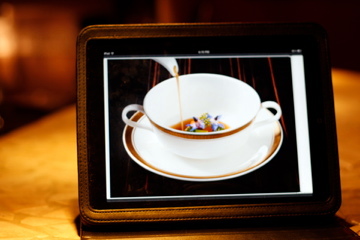 A little while later we were outside at the gate, and I let him pick the direction of our walk. He walked for two blocks then insisted we go down a busy street. We never walk down that street due to the traffic, especially since our neighborhood has so many quaint quiet streets. Anyway, he literally insisted that we go down 19th Street. I gently tugged his leash to keep going straight but he would not have any of it. “OK, Wils, you win.” He walked about four houses down 19th and just stopped for no apparent reason. I looked down, and there at my feet, was a weed growing out of the crack in the sidewalk in front of a home without any real garden, a little plant with prickly stems with a few bright blue flowers. Borage?!?! 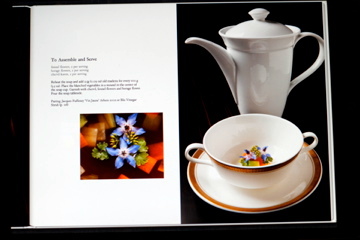 Well, I was stunned to say the least.  I picked the “weed” with its few striking blossoms and brought it home. I have walked and continue to walk all over our town. I have NEVER seen this flower anywhere before or since that day.

I am always interested in what my neighbors are growing, especially edible flowers, roses, fruit, and herbs. And I keep an eye out for borage. Now it has been a year since the borage sighting, and the only other place borage has shown up in San Pedro, is in my own yard, where I subsequently planted the seeds.

Wilson was a very special guy. We will always love him and always remember him. Thank you everyone for your sweet, heartfelt condolences…and we will always be grateful to Boston Buddies for bringing Wilson into our lives.

29 thoughts on “Wilson The Love Bug”