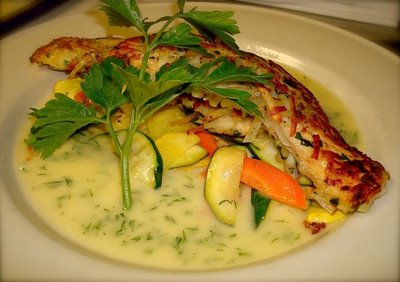 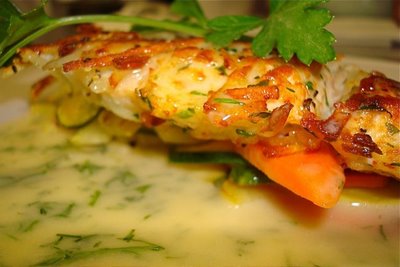 Evelyn was my grandmother-in-law.
She passed away at 93 years of age in the year 2000. 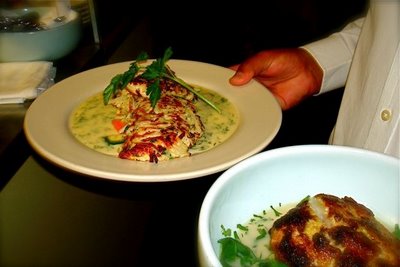 As a tribute when Evelyn passed, the proprietors of Gina Lee’s Bistro, Scott and Gina Lee, named this dish after her. They keep her memory alive daily in their fabulous restaurant, as waiters are constantly asked by new patrons, who is Evelyn Dawn and why is the salmon named for her? They are quick to tell about Evelyn; an independent woman ahead of her time, with impeccable taste, a successful businesswoman, friend, mother, grandmother, great grandmother, and educator of hundreds. Scott and Gina keep a framed photograph of Evelyn in the restaurant.
Evelyn was often asked about the secret to her vitality at her age. When someone would ask her age, she would tell them the truth, and they wouldn’t believe it. She would reply, “Do you really think I would lie and increase my age?” She had a great sense of humor too.
Scott and Gina said of the salmon dish, “This is a crowd favorite. Lots of people remember “Miss Dawn” who among other things founded Rolling Hills Country Day School. She came in the restaurant nearly daily and always had the salmon professing that the omega 3 fatty acids kept her going at top speed. We’ve had former students and teachers come in and marvel that she lives on our menu.” 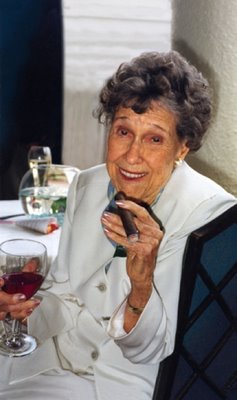 Miss Evelyn Dawn
July 8, 1907 – July 16, 2000
Here’s Evelyn in her 90’s with a glass of red wine and a cigar!
Rolling Hills Country Day School was founded in 1961 by Evelyn Dawn who began educating children in the early 50’s. She bought and operated her first school in Manhattan Beach, California—a preschool. Seeing growth opportunities along the beach area, Miss Dawn sold her Manhattan Beach school and bought a new facility in Redondo Beach that also included two swimming pools. There she taught swimming and the ABC’s to hundreds of local children. Every year her preschool program grew and eventually she needed a site that would house her dream: to provide a high quality educational experience for children. In 1961, Miss Dawn, with very little assistance, broke ground on a beautiful piece of land on the Palos Verdes Peninsula and realized her dream of a Kindergarten through Grade 8 School, that is Rolling Hills Country Day School.
Today would have been her 101st birthday.