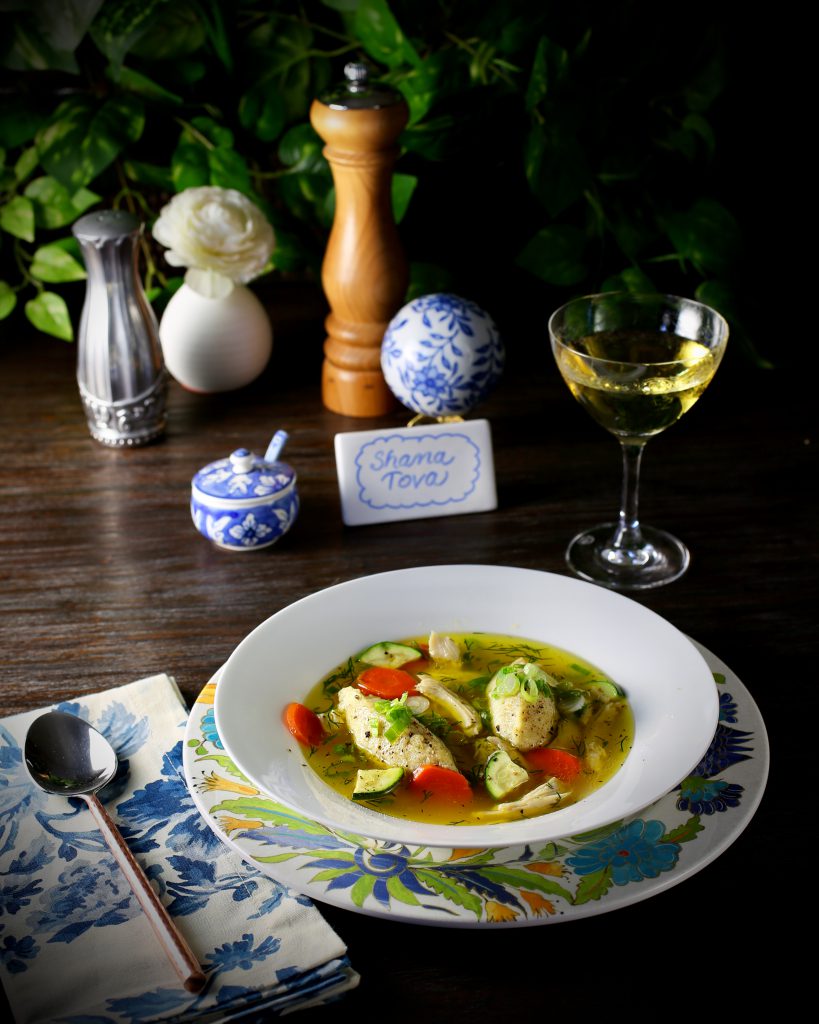 Although my Jewish grandparents hailed from Russia and Romania, this Rosh Hashanah, I’m serving a dish that hails from a neighboring country – Hungary. It is one very similar to our beloved matzoh ball soup.

The dumplings, called gríz galuska, are shaped into three-sided ovals instead of round balls. They are made of farina instead of matzo meal. The batter contains a simple mix of egg, olive oil, and salt, just like matzoh balls. Similar, but different…something NEW for a NEW year.

Chicken Soup with Hungarian Farina Dumplings is definitely a delicious way to ring in the Jewish New Year! As the Rosh Hashanah celebration has no shortage of symbolic foods, my chicken soup has plenty of carrots to symbolize prosperity. They are sliced into wheels to look like gold coins. And the soup bowl is FULL of chicken, vegetables, herbs, and dumplings to symbolize abundance. I think my Nana and Papa would approve. (Read more about them and a great recipe for Kasha Varnishkes here). 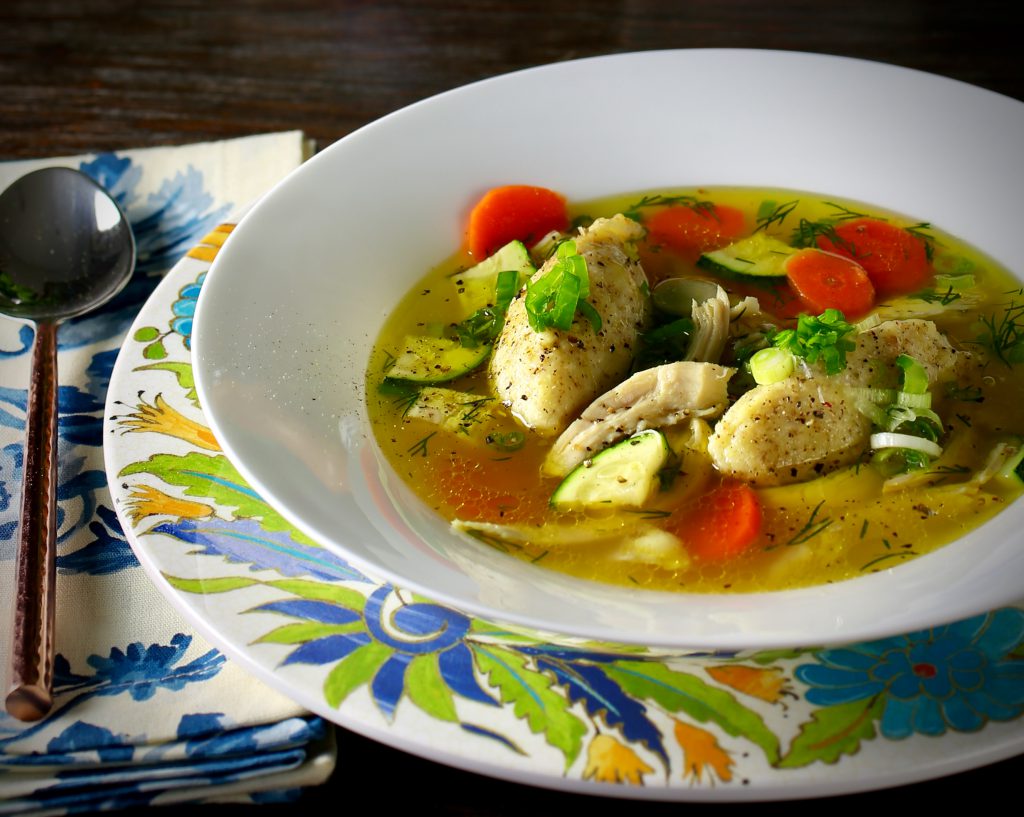 Blend eggs, olive oil, and salt together in a small mixing bowl. Mix in farina. Chill in refrigerator for 30 minutes.

Place chicken broth in a large wide pot. Bring to a boil then turn the heat to medium. Using two oval-shaped tablespoons, form quenelles by passing a scoop of dumpling batter between the bowls of the two spoons to make a three-sided oval.

Drop the ovals into the broth and cook for about 15 to 20 minutes. To test if the dumplings are done, remove one from the pot and cut it in half. The entire center should be light like the outside of the ball, not darker yellow in color.

Bring homemade chicken soup with sliced carrots and shredded chicken to a boil. My chicken soup recipe is here. Turn down the heat and add sliced zucchini and snipped fresh dill for 3 to 5 minutes until the zucchini is soft.

Place 2 dumplings in each soup bowl. Ladle soup with lots of vegetables and chicken over dumplings. Garnish with fresh ground black pepper and thinly sliced scallions.

For Passover, however, go with traditional matzoh balls as these dumplings would not be suitable according to Jewish dietary laws.

To a Good Year! 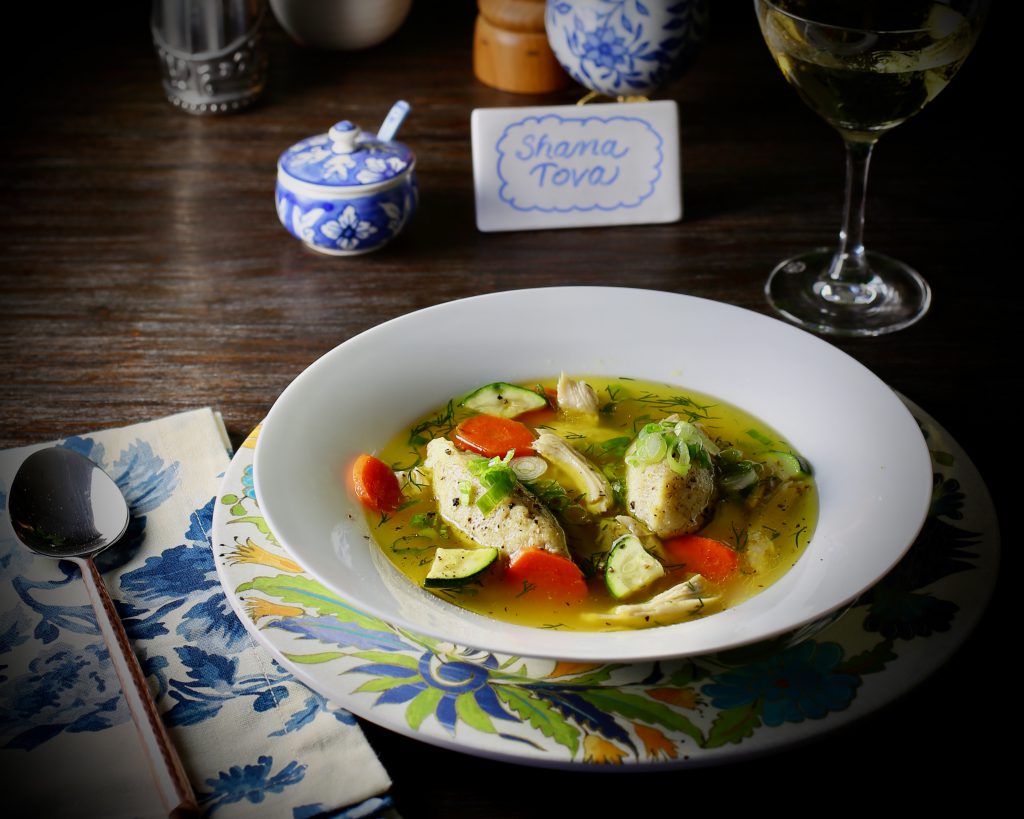 The Passover Table is Covered with Frogs