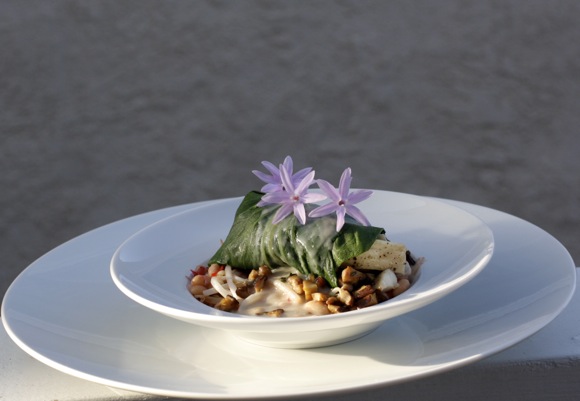 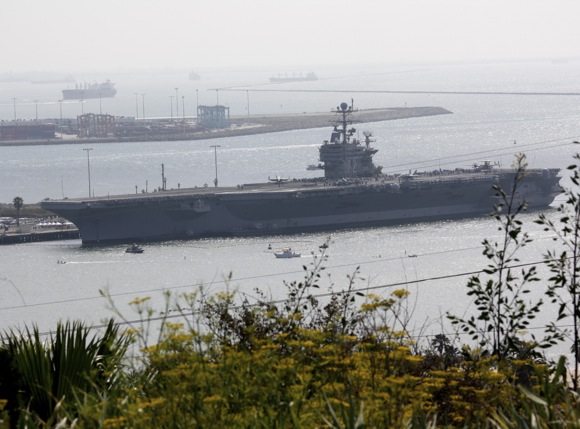 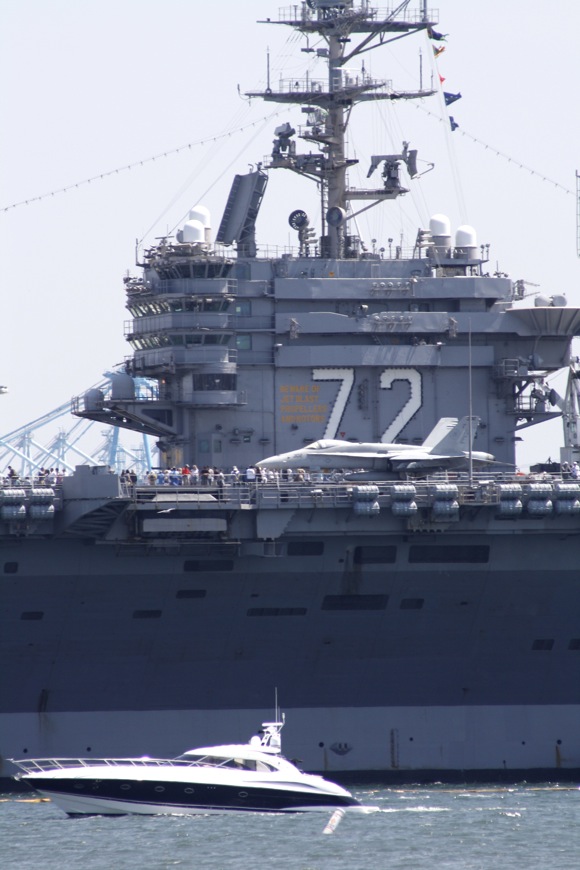 With a crew of approximately 3200 in the Ship’s Company and an Air Wing of 2480, the food consumption on board is mind-boggling. Serving hamburgers? If each sailor eats 2, the mess has to cook 11,360 burgers. They are baking 900 loaves of bread, consuming over 500 gallons of milk and serving 11,000 eggs daily. There are multiple galleys and mess halls on board, which collectively prepare over 17,000 meals a day. And in a six month period the mess serves over one million cookies! 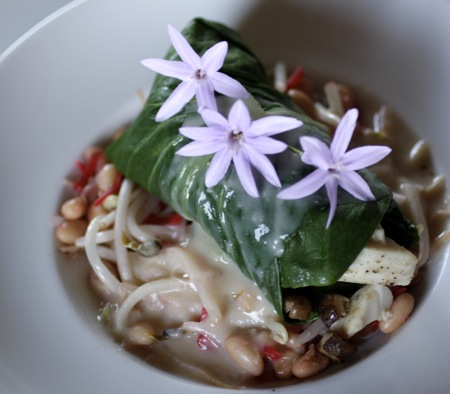 in honor of the uss abraham lincoln 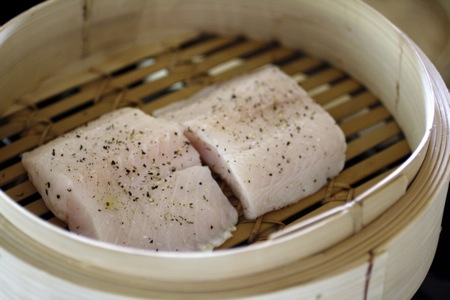 Bring a pot of water to a boil and blanch bok choy leaves. Spread the leaves out on a flat surface in an overlapping pattern. Season 4 oz. pieces of fresh sablefish, aka black cod, with salt and pepper. Dip the bottom of each filet in a bit of olive oil to prevent sticking. Place fish in a steamer basket, cover, then place over the pot of boiling water and steam until the fish is just cooked through, about 12 minutes. 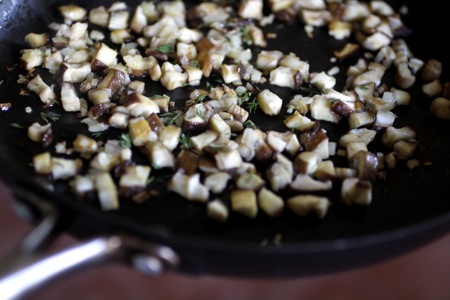 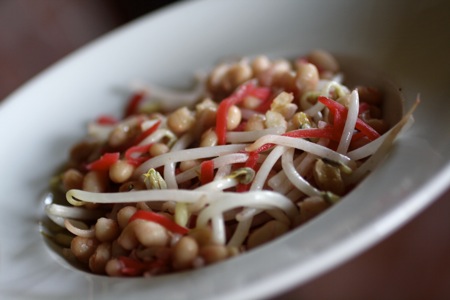 The NAVY bean got its name because it was a staple food of the United States NAVY in the early 20th century, as dried beans do not spoil, and they provided an excellent source of nutrition for sailors. NAVY beans are pea sized white beans also known as haricot beans, Boston beans, pea beans, and Yankee beans. 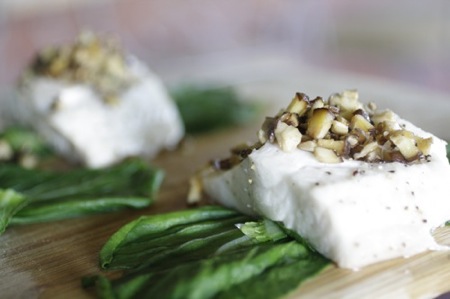 Place the filets on the bok choy. Top with sautéed shiitake. 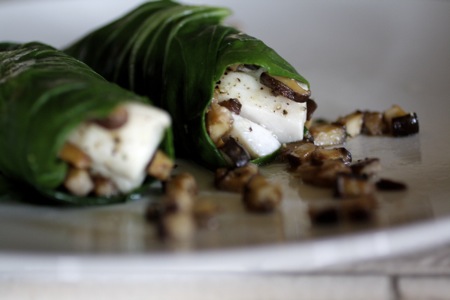 Wrap the bok choy around the fish and place the bundles in the steamer basket. Steam for another three minutes to heat the bundles. 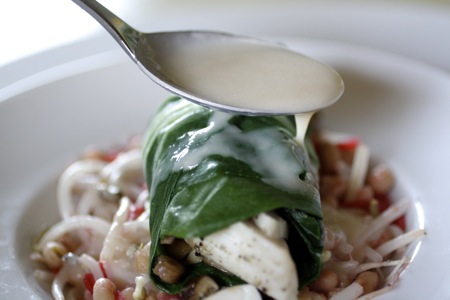 To make the sauce – puree 1/2 c. NAVY beans with 1/2 c. hot chicken stock until velvety smooth. Season with salt and pepper to taste.  Place the warm bundles over the bean/sprout/ginger mixture and top with NAVY bean emulsion.  The emulsion is surprisingly complex and creamy, yet made with only two ingredients and no cream. It is a perfect accompaniment to the exquisite fish. For extra flair, the dish is garnished with society garlic flowers. 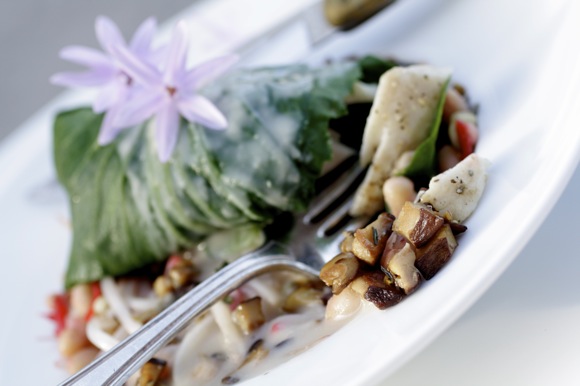 This dish was so delightful (and heart-healthy) I made it two nights in a row. The idea for the combination of the flavors in this dish comes from one of my favorite seafood cookbooks, Charlie Trotter’s Seafood. Sablefish, when steamed, is meltingly tender and delicate. Earthy shiitakes and mung bean spouts add a clean poignant accent to the fish and buttery NAVY beans. The red ginger adds unexpected brightness and a sassy bite. And if using pre-cooked NAVY beans, this distinctive dish takes less than 30 minutes to prepare. 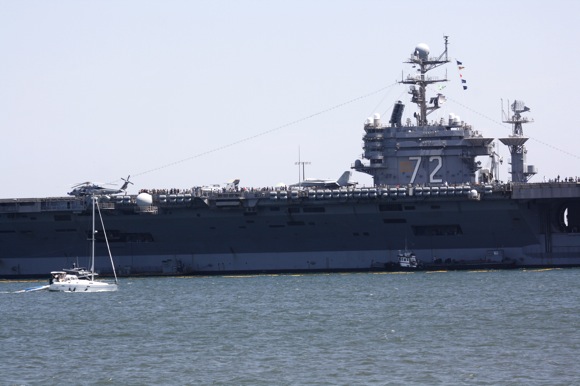 Her Motto: Shall Not Perish
Go NAVY! Thank you for your service.

“That this nation, under God, shall have a new birth of freedom
and that government of the people, by the people, for the people,
SHALL NOT PERISH from the earth.”
Abraham Lincoln
Gettysburg, Pennsylvania
November 19, 1863